Tesla To Reveal Details Of Its ‘Gigafactory’ 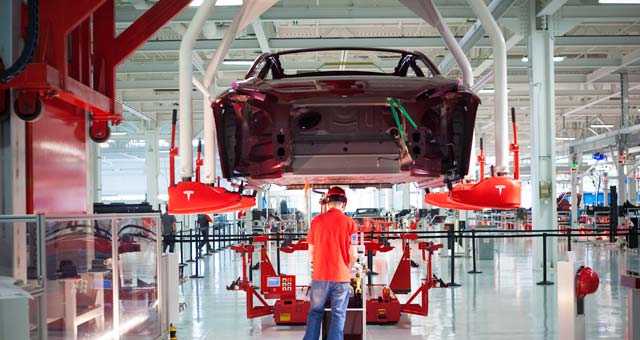 Tesla Motors says that this week it will reveal plans for a huge new lithium battery factory dubbed the “Gigafactory” by Tesla founder Elon Musk.

The new Gigafactory is the key Tesla needs in order to produce an “affordable” long-range electric car in substantial enough numbers to join the ranks of the major automakers.

During the third-quarter earnings call, CEO Elon Musk mentioned this Gigafactory, which would increase the number of cells and lithium-ion batteries created.

Musk didn’t go into too many details about . He explained, “It’s going to have essentially zero emissions and there are no toxic elements that are going to come out of this factory and we will build in recycling capability right into the factory. So old packs would come in one side and get reprocessed as new packs. So a way to think of this is like a factory is the machine that works for machine and that itself has a version, just like you have a version of a product. It’s like a version of the factory. So we are trying to figure out what’s the right way to do version one at this Gigafactory and we want to be thoughtful about it and it is going to be a really giant facility, like say we are doing that something that’s comparable to all lithium-ion production in the world in one factory.”

The size of the Gigafactory will be massive. Musk predicted in November that it would have a capacity equal to all factories making lithium ion batteries around the globe. That includes lithium batteries going into Teslas as well as laptops, tablets and smart phones.

Tesla will likely swallow up the lion’s share of the output of the Gigafactory, although it has said it will sell some of the batteries to the solar power industry for storing energy collected during the course of a day. Musk is also chairman of a solar panel company, SolarCity.