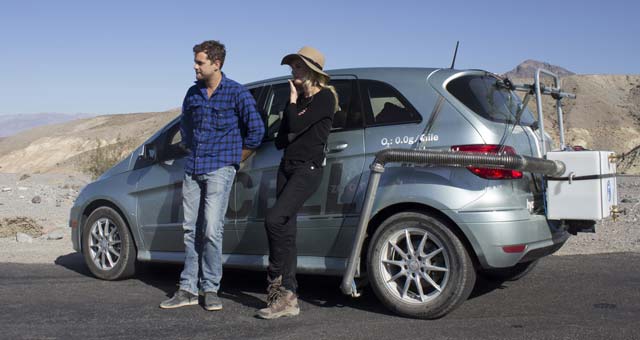 For more than two years the Hollywood stars Diane Kruger and Joshua Jackson have been enthusiastic drivers of the B-Class F-CELL, whose only emission is pure water.

But they are not the only ones: The Mercedes-Benz B-Class F-CELL is becoming a popular and treasured endurance runner. In the USA alone, an F-CELL fleet made up of some 70 vehicles has covered more than 1.6 million kilometers – saving around 113,500 liters of fuel and almost 270 tonnes of carbon dioxide in the process.

A total of around 200 vehicles have been with customers in the USA and Europe since 2010 and one of these vehicles already has 315,000 kilometers on the clock.

Diane Kruger and Joshua Jackson are now showing in a film just how much potential the fuel cell drive system offers – on a trip in California’s Death Valley, one of the driest places in the world.

“We’ve become absolute fans of the fuel cell. The car usage is so easy. On a day-to-day basis our normal mobility isn’t restricted at all – and we had no water problems in Death Valley either”, reported Diane Kruger. “It takes three minutes to fill up, drives about 400 kilometers and gives off zero emissions – simply perfect”, added Joshua Jackson.

In the film “Defying Death Valley” the two of them are driving through the 50 degree Celsius heat of Death Valley – without any drinking water stock. Their lives rely on the emissions of the B-Class F-CELL. The Hollywood stars are using the water, resulting out of the operation of the F-CELL, for drinking and cooking.

The fuel cell as tomorrow’s drive system, ready for series production
The B-Class F-CELL is the first fuel cell electric vehicle from Mercedes-Benz to be built under series-production conditions. The electricity required for driving is generated on board the car in a chemical reaction between hydrogen and oxygen. With a range of some 400 kilometers and short refuelling times of less than three minutes, the B-Class F-CELL combines emission-free mobility with absolute feasibility for use on long journeys and impressive performance.

Fuel cell technology is an integral component of Daimler’s long-term drive system strategy, with emission-free mobility as the culmination of these efforts.

During the Mercedes-Benz F-CELL World Drive of 2011, three B-Class F-CELL vehicles took 125 days to drive 30,000 kilometers through 14 countries on four continents, in a convincing demonstration of the everyday viability of this technology. Joshua Jackson was one of those who took part in the first circumnavigation of the globe with fuel cell cars, driving a section of the route in the USA.

As well as almost 200 B-Class F-CELL, Daimler AG has brought 60 A-Class F‑CELL, three Sprinter vans and almost 60 buses with fleet tests into the market since 2001. Until now the more than 300 fuel cell vehicles have driven around nine million kilometers altogether, providing proof indeed of the unrestricted everyday viability and durability of fuel cell technology.

In early 2013, in a bid to speed up the widespread market availability of this emission-free technology and to reduce investment costs, Daimler, Ford and Nissan reached a cooperation agreement covering the joint development of a fuel cell system. The aim is to introduce a competitive fuel cell powered electric vehicle to market in 2017.

It is envisaged that significant further progress will have been made by then, in particular towards creating a sustainable infrastructure – not least as a result of Daimler’s high level of involvement in various demonstration projects and within the framework of the H2 Mobility Initiative. This initiative has recently agreed to expand the current network of 15 filling stations in Germany’s public hydrogen infrastructure to about 400 H2 filling stations by the year 2023. This means that an H2 supply suitable for everyday use shall be created not only for densely populated areas and main traffic areas, but also for rural areas.[wzslider height=”400″ lightbox=”true”]