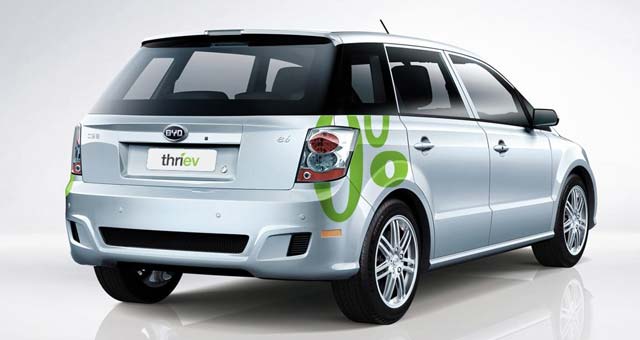 BYD has teamed up with Thriev to provide 20 BYD e6 cars to the company’s emission-free London chauffeur-driven fleet within the next few weeks.

Thriev offers low-cost, zero-emission, chauffeured cars to corporate and private users in London. The company is rolling out an electric car programme complete with its own rapid chargers, cars and state-of-the-art car/charger scheduling systems.

Part of the deal with BYD is that Thriev will equip its facility at Edgware Road, west London, with BYD’s purpose-designed charging equipment, which allows fast charging of the e6 in just two hours.

Initially, the e6 fleet is being supplied on a lease arrangement, although both BYD and Thriev expect this to be the beginning of a long-term relationship that will go some way to fulfilling a joint BYD and Thriev vision of a ‘green city solution’ – the transitioning of key public and personal transport vehicles from petrol and diesel power to pure electric. In December, two fully-electric, full-size buses operated by Go-Ahead Group, entered service on two central Transport for London routes – part of a Europe-wide initiative to introduce emissions-free BYD buses to major city centre operations.

Both the e6 car and ebus from BYD share the same proven and reliable electric technology. They use BYD lithium iron Fe batteries, which have been proven in millions of miles of taxi and bus passenger-carrying service in China as well as many parts of the world.