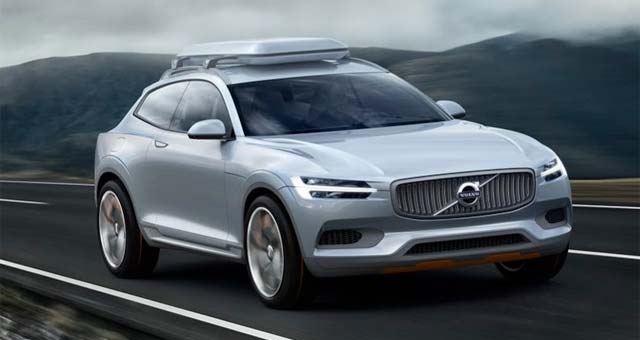 This is the new Volvo Concept XC Coupe which will have its world debut for the first time at the 2014 Detroit Auto Show next week.

The Volvo Concept XC Coupe is what we can expect from the next XC90.

The next generation Volvo XC90 will launch in late 2014 and the plug-in hybrid version will be offered worldwide as soon as the new XC90 launches.

“At the moment we launch the XC90, we will also launch the petrol plug-in version. We have the four-cylinder turbo strategy – where we say, you know, we go full for four cylinders. We have a 300-plus horsepower (220kW) engine – at least 300 and the final “plus” we are still defining, as a basic engine. And then we get the electrification. So you end up with a 600Nm-plus car,” says Volvo Cars product planning boss Lex Kerssemakers.

“It’s the right combination between power and fuel efficiency, that’s what we believe. It should be class-leading. We have very efficient powertrains, combined with electricificaiton, that’s always good. It’s always better than V6s or V8s. We want to have the power of the V6 and V8, however in a very modest way.”

Each concept has been designed to preview Volvo’s new look and highlight the flexibility of the company’s new Scalable Product Architecture (SPA) platform, which will be rolled out first on the XC90 and ultimately on all Volvos larger than the V40.

“Concept XC Coupe shows how clever engineering makes it possible for us to reinforce our world-leading safety without compromising design, size or weight. Thanks to extensive use of high-strength boron steel and structures with new, ingenious decoupling we can make SPA cars more compact and safer at the same time,” says Thomas Ingenlath.

However, the larger 21-inch wheels, the more accentuated wheel-arches and the taller roofline contribute to a more robust impression and a fuller, capable look.

The extended distance between the dashboard and the front axle is still a very powerful visual element. The capable stance is emphasized by details, such as the new bonnet and a beltline that spans an elegant bow along the whole car.

The inspiration from and recently established co-operation with the Swedish company POC – developers of high-tech protective gear for gravity sports athletes – is highly present in the concept car.

To strike the right balance between aesthetics and functionality, the design team has also given traditional SUV elements, such as side molding and skid plates, a modern interpretation. They are more integrated in the sleek design, flush with the surrounding body areas.

Just like Volvo Concept Coupe, the face of the Volvo Concept XC Coupe is characterized by a new topography on the bonnet and the ‘floating’ grille, flanked by headlights featuring new T-shaped DRL light guides. The rear light signature is also a distinctive element in the new design direction of Volvo Cars.[wzslider height=”400″ lightbox=”true”]