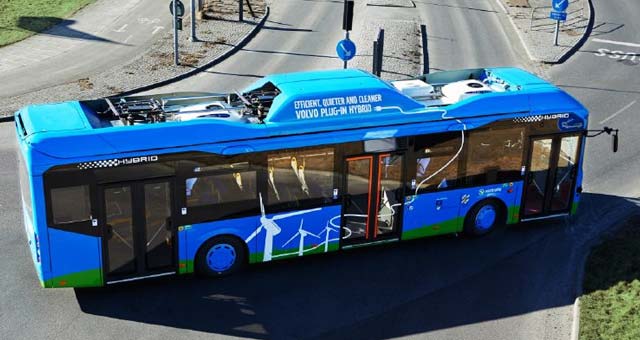 Fuel consumption is reduced by over 80% and the total energy consumption by over 60% — the results of the field tests being conducted in Gothenburg show that Volvo Plug In Hybrid Bus more than meets expectations.

The Volvo Plug In Hybrid Bus consumes less than 11 liters of fuel for every 100 kilometers. That’s 81% less fuel than the equivalent diesel bus consumes.

Moreover, the figures for the overall energy consumption, including both diesel and electricity, have exceeded the target. Here, the plug in hybrid gives an energy saving of 61%, compared to a corresponding diesel bus Euro 5.

The field test in Gothenburg began in June 2013 and includes three plug-in hybrid buses, whose batteries are recharged at the terminals. This makes it possible for the buses to run on electric power for most of the route.

In addition to the significant energy savings and reduced impact on the environment, this technology gives passengers a more comfortable and pleasant journey and improves the working environment of the drivers.

The field test of the Volvo Plug in Hybrid Buses in Gothenburg involves 10,000 operating hours and will continue for most of next year. A demo project that will bring eight more plug-in hybrid buses into service will commence next year in Stockholm.

A number of European cities are showing a keen interest in the plug in hybrids. Hamburg and Luxembourg have already signed contracts for supplies of the buses in 2014 and 2015. Volvo Buses is working together with the city councils, public transport authorities and providers to develop long-term sustainable solutions for public transport. Volvo Buses plans to commence commercial manufacture of plug-in hybrids towards the end of 2015.

– The bus is fitted with an electric motor which is powered by a lithium battery. It also has a small diesel engine.

– The bus is recharged from the mains power supply via an energy storage unit mounted on the roof. It takes 5 or 6 minutes to recharge.

– The bus can run exclusively on electric power for approximately 7 kilometers (about 4.3 miles) – without any noise or emissions.