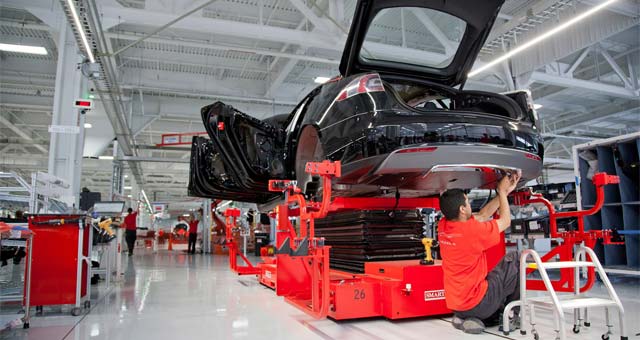 What do you think would be the best way to make electric car batteries cheaper? Outsource production to China? No, not really! That’s what the majority of electric car manufacturers have been doing for the last few years anyway and, unfortunately, the battery prices remain stubbornly high even though the production volume has increased. A surge in supply should have triggered a price reduction, however because there’s also an ever-increasing demand for Lithium-ion applications, the prices have remained the same or even increased.

According to Ford’s chief executive Alan Mullaly, the battery pack is the most expensive part of an electric car. To be precise, it accounts for one third of electric car cost averaging at around $15,000 per pack. To be able to reduce this amount to, say, below $10,000, would make a big difference to the price the average motorist pays for an electric car at the dealership.

So why don’t we instead move battery production to a country where businesses struggle with high overheads and expensive employment? That’s exactly what Elon Musk, CEO of Tesla, is looking to do but wait, there’s a method to the madness.

Don’t rush with the judgement, Mr Musk has it all planned out. He anticipates building the world’s largest electric car battery factory. “Largest” is probably not the most appropriate word to describe what’s going to be larger than all the other battery producers taken together. Is he just a tad too ambitious or a true visionary? Well, if we assume that 7% of the global light vehicle fleet is going to be either all-electric or hybrid (i.e. carrying a battery), a big reliable battery production plant wouldn’t really come amiss.

So, why America? Firstly, it’s easier to control the quality. Secondly, you don’t have to share your know-how with China and other global competitors. And finally, it’s a strategic location, especially, as there might be a lithium giant arising from the hot dust of the Nevada desert.

Western Lithium Corporation has discovered Hectorite clay under an enormous plot of land they own in Nevada. So what? Why should I be bothered unless I produce lipsticks? Well, this time it’s got nothing to do with cosmetics. Hectorite is a rich source of lithium and it’s relatively inexpensive to make lithium carbonate – the main raw material used in electric car battery production.

Currently, in the open market, a tonne of lithium carbonate costs $6,000. Western Lithium thinks they can bring the net price down to $968 per tonne once they reach the sweet spot in the yearly production volume – namely 26,000 tonnes. That would be like turning the time back to 1963 when people didn’t have much use for the shiny lithium and prices were at under a thousand per tonne. Western Lithium would instil the Asian miners with a massive shock and they would be forced to reduce their prices.

Canada Lithium Corporation is another important player in the future of electric cars. Its Quebec mine is capable of producing 20,000 tonnes of high-quality lithium per year. And that’s only one company; Canada is rich in lithium ore.

So piecing the puzzle together, U.S. is currently the best place to build an electric car battery factory. It doesn’t get better than this. If Western Lithium’s plans go ahead, the United States will have world’s cheapest lithium carbonate supply. If that fails (it shouldn’t really), there’s Canada plus there are two countries just across the Caribbean Sea boasting the world’s largest lithium ore reserves – Argentina and Chile – a good contingency!

Owning the world’s largest car battery factory will cement Tesla’s position as a leader in electric car production. The only question is who’s going to invest in such a large and risky project?