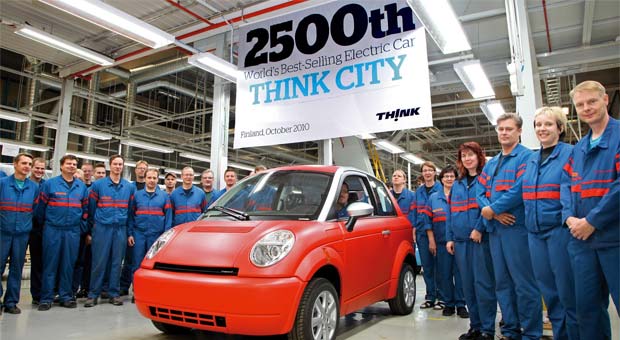 Norwegian electric vehicle maker, THINK, announces the production of the 2,500th unit of the THINK City electric car, designed for urban use.

THINK engineers estimate that the City has accumulated 35 million zero-emissions road miles to date. The company has begun preparations to build the sturdy and reliable two-seat commuter at a plant in the American heartland in Elkhart, Indiana and plans to launch fleet and retail sales in December.

THINK has been a unique innovator in pure electric vehicle and power-train technology for nearly twenty years, positioning the company as a world-leader in producing cars on a dedicated electric platform. The City can maintain speeds of 70 miles per hour and travel up to 100 miles on a single charge.

The THINK City model is currently in its second production version.  A third version is scheduled to be produced in the U.S. and come on the market in late 2012. The new facility will be in addition to THINK’s current manufacturing capability in Finland, where it has contracted with Valmet to build the THINK City for European market.