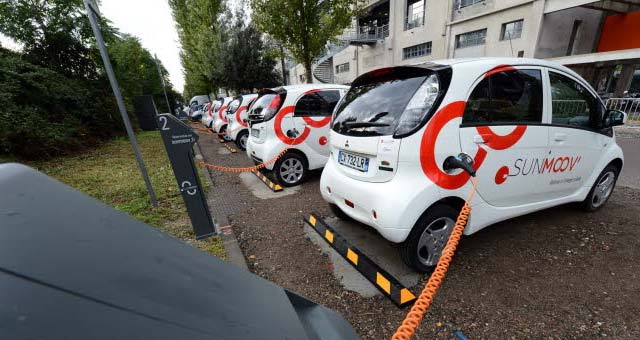 Toshiba Corporation announced that it has completed construction of a car sharing system for the Lyon Confluence Smart Community Demonstration Project.

This car sharing system is intended to ease traffic congestion and the lack of parking spaces in the Lyon redevelopment area, and to point the way to next generation traffic systems that will contribute to the realization of a low carbon society.

Thirty Citroen C-zero and Peugeot iOn electric vehicles will be supported by each plug-in recharge station, and three quick charge stations in addition. The project will run for two years until December 2015.

Toshiba’s role is to build and maintain the system and its components, including its Solar Power Generation Amount Forecasting System and Charging Schedule Optimization System that optimizes use of renewable energy as an energy source of electric vehicles. This predicts solar power generation capacity on the basis of information from weather forecasts and climate analysis, and combines this information with the status of reservations for EV sharing and data from their electrical systems, to arrive at an optimized allocation of the vehicles to users and optimal control over the electricity charge schedule of each vehicle.

Photovoltaic power generation capacity is strongly influenced by the weather and this can have a major impact on large systems based on solar energy. Further challenge is optimizing power charging system management in a car sharing service where demand for vehicles will fluctuate.