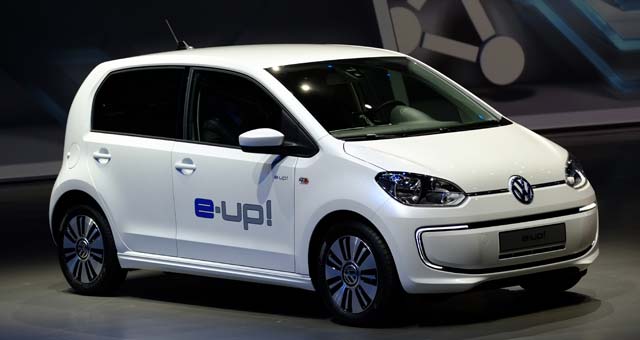 From the middle of October, Volkswagen will be supercharging its model range with the brand’s first electric vehicle: the new Volkswagen e-up!.

Creating a double impact on the e-mobility stage, the Volkswagen e-up! will be followed just a few months later, in spring 2014 (launch in Germany), by a further zero-emission Volkswagen: the e-Golf.

Both electric cars will make their debut at the 2013 Frankfurt Motor Show, heralding the era of full-production e-mobility for Volkswagen.

The launch of the Volkswagen e-up! marks the introduction of a next generation electric vehicle that thanks to an armada of innovative detailed solutions uses energy extremely economically. The e-up! consumes, for instance, just 11.7 kWh/100 km. At an average electricity price of 25.8 cents (Germany, July 2013), driving 100 kilometres costs just €3.02.

The pioneering efficiency of the e-up! is attributable to the very good cD value for a car of this size of 0.308 (4 per cent lower than the take up!), optimised rolling resistance (7 per cent lower), the generally energy-saving drive system components, the highly effective regenerative braking system, innovative equipment modules and a newly developed, particularly efficient air-conditioning system.

A compact electric motor (60 kW / 82 PS and 210 Nm starting torque), the lithium-ion battery integrated into the floor and the power electronics form the hub of the new high-tech car’s drive system. The electric motor’s power is transferred to the front wheels via a single-speed gearbox. Volkswagen itself developed all of the components, including the battery. With a top speed of 130 km/h, the average range of the e-up!, dependent on route profile, driving style and payload, is between 120 and 160 km; at very low outdoor temperatures the range may be less. These range distances work especially well in urban areas and for the majority of commuters. In Germany, for example, studies by the Federal Ministry for Transport, Building and Urban Development found that around 80 per cent of all car drivers in Germany – from job commuters to drivers who make frequent journeys – drive fewer than 50 km daily.

The lithium-ion battery fitted in the e-up! into the vehicle floor weighs 230 kg and is made up of 17 modules, each with 12 cells. These 204 cells add up to a rated voltage of 374 V and rated power of 18.7 kWh. At peak level the cells provide an effective power output of 75 kW and over a continual period 35 kW. The cell modules of the battery, measuring 1,726 mm long, 1,132 mm wide and 303 mm at its highest point, have been integrated, as already indicated, in space-saving fashion within the floor of the e-up!. Compared to other lithium-ion cells (e.g. from the field of consumer electronics), the battery system’s cells are particularly resistant to heat and cold, meaning that no separate battery cooling or heating is required. Like the electric motor and the gearbox, the battery system, battery electronics and the relevant control software were also developed in-house at Volkswagen.

Another central element of the drive system is what is known as the power electronics. This complex module weighs 10.5 kg in the e-up! and, acting as the link, controls the flow of high-voltage power between the e-motor and the lithium-ion battery (depending on battery voltage between 296 and up to 418 V). In doing so the power electronics convert the direct current (DC) stored in the battery into alternating current (AC) and use this to drive the motor. Via a DC/DC converter it also supplies the vehicle’s circuitry with voltage of 12 V.

The power electronics module is connected to the e-motor via the sort of yellow-and-orange 3-phase cable typical for electric vehicles. The connection to the lithium-ion battery is established via two traction cables.

Electric cars are essentially equipped with two brake systems independent of each other: on the one hand, as in conventional cars, a mechanical, hydraulically operated brake system is there to slow the car down. At the same time, however, the e-motor acts when recovering energy as a motor brake. These two types of braking now blend together in the e-up! thanks to the electromechanical brake servo.

The other specific functions of the e-up! used while driving the car are practically self-explanatory. You have to think of the car’s tank as a battery filled with electrical energy that empties during the journey. The faster you drive or the more you accelerate, the greater the amount of energy consumed. However, as the driver you have considerable influence over this level of consumption and thus over the range. The e-up! is able to switch off temporarily unneeded consumers and in general to transform kinetic energy – produced when coasting or by braking – into electrical energy and to store it in the battery.

The range of the e-up! can be varied via three different driving style profiles: the standard mode (automatically on), ‘Eco’ and ‘Eco+’. Anyone nipping around travelling short distances, will stay in standard mode. For drivers wanting to extend the range, the first option is the ‘Eco’ mode. The effects of selecting this mode include paring back the e-vehicle’s maximum power output to 50 kW and limiting its top speed to 115 km/h. In parallel with that the electronics reduce the output of the air-conditioning system and modify the response curve of the accelerator pedal. In ‘Eco+’ mode the electronics limit maximum power output to 40 kW, modify the performance response curve and disable the air conditioning; in this mode the car can reach a top speed of 90 km/h.

To recharge the Volkswagen e-up! you simply connect it to the mains. However, there are various ways that this can be done. The simplest option is to plug the mains charging cable supplied with the car into a conventional 230-volt socket. The battery is then charged from the mains at a power level of 2.3 kW. A completely flat battery is recharged in this way within nine hours. As an option Volkswagen offers a wall box for the garage that charges the battery at a power level of 3.6 kW. The (completely flat) battery would thus be fully recharged after six hours. There are also public charging stations that ‘refuel’ electric cars at a power level of 3.6 kW. As a new car the e-up! can also be prepared for the combined charging system (CCS) using a DC power supply. In this case it can alternatively be ‘refuelled’ via special CCS charging stations at power levels of up to 40 kW. The battery is then 80 per cent recharged after just 30 minutes.

Volkswagen has developed a range of features and design elements specifically for the e-up!. The electric car can thus be quickly identified as such. The array of bespoke features includes the LED daytime running light’s new signature look, aerodynamically developed alloy wheels and an interior in a bright and friendly design. The standard e-up! equipment also includes applications for the maps + more infotainment/navigation system programmed specifically for e-mobility, a radio/CD system, hands-free phone function, four doors, heated windscreen, air conditioning and heated seats.

The new Volkswagen e-up! is first and foremost a Volkswagen. And that means that like all other versions of this specialist city car the electrically powered version is also fully intuitive to drive, reliable and safe. Everything begins as it always begins. Get in, buckle up, foot on the brake, start the motor. In cars with internal combustion you now hear the engine, while the rev counter’s needle also shows that things are happening. In the e-up! nothing like that occurs. Although the electric motor is indeed on, it produces neither noise nor vibrations. And as for the rev counter, there is none. The e-up! signals its readiness to its driver via routines specially designed for the purpose. When the car is started and ready to go, the speedometer needle pegs to the end stop once and then returns to the home position. The illumination of the indicators on the e-up! instrument panel is also switched on, regardless of whether the car’s outside lights are on or not. At the same time the battery charge indicator rotates to the current level and the power indicator moves from ‘Off’ to ‘0’. Last but not least, the word ‘Ready’ appears in the panel’s central display, backed up by an audible signal. The zero-emission journey can now begin!

The e-up! comes as standard with the portable maps + more navigation system, complete with Bluetooth hands-free facility. In the e-up! it provides numerous new functions, such as range display (‘360° range’). In this mode a map of the surrounding region shows the radius of the area that can be reached with the current level of charge. Here too there are several different functions: ‘One-way range’ (route in one direction), ‘Range including return’ (route there and back) and ‘Combined’ (both range options).

Whenever a destination is entered into the navigation system the driver is informed (via a newly devised range warning system) whether the distance is possible with the current level of battery charge; if not, appropriate stops can be scheduled via the charging stations shown in the points of interest (POIs). A single, one-way route thus becomes a multi-stop route. Drivers are also able to save their own and new charging stations on the system and integrate these into their route planning.

Using the ‘Car-Net e-Remote’ app it is also possible to make the most of these settings and information requests (air conditioning, battery charging, vehicle data and vehicle status info) via a smartphone or the Car-Net website.[wzslider height=”400″ lightbox=”true”]

Sep 10, 2013Blagojce Krivevski
The Volkswagen e-GolfBMW i8: The sports car of the future