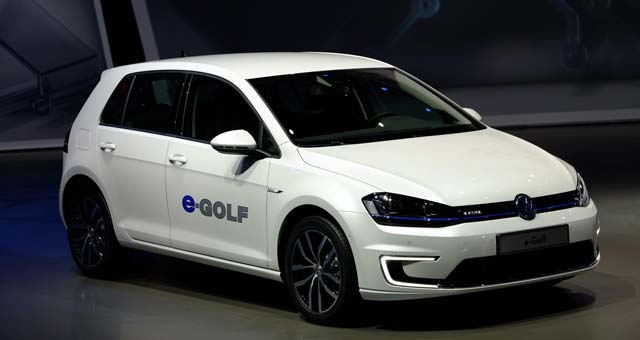 Volkswagen is electrifying Europe’s most successful car ever: the Golf, with the world premiere of the e-Golf at the 2013 Frankfurt Motor Show.

Both agile and efficient, the e-Golf demonstrates best-in-class qualities from the off, leading the way with a low power consumption figure of 12.7 kW/100 km1. Thanks to a particularly innovative overall technological system, improved aerodynamics (cD = 0.281) and perfected rolling resistance, the Volkswagen is thus 10 per cent more energy-efficient than the best steel-built direct competitor. As a result, the e-Golf will be cruising as of spring 2014 (when the European launch begins) extremely economically around the cities of the world (launches in Asia and North America follow in late 2014 / early 2015). Energy costs: around €3.28 per 100 km2.

The very well equipped four-door e-Golf (with a specification which includes the high-end ‘Discover Pro’ radio/navigation system, a heated windscreen, automatic climate control, parking heater/ventilation, leather steering wheel) is recognisable at once by the aerodynamically optimised ‘Astana’ alloy wheels and − being used by Volkswagen for the first time − by its LED headlights (both standard on all models). The LED headlights are more energy-efficient than xenon systems, yet produce even more light. Also highly energy-efficient are the likewise standard LED daytime running lights with their C-shaped design, a signature feature of the company’s electric vehicles. Another striking feature is the bottom strip across the radiator grille. As on the Golf GTI, but in this case blue rather than red, this strip carries on into the headlights – an element that, like the ‘Think Blue.’ campaign, consciously underlines the electrically powered Golf’s environmentally friendly efficiency.

The e-Golf is powered by an 85 kW1 / 115 PS1 electric motor. From a standing start the synchronous motor, internally called the EEM 85, develops an impressive maximum torque of 270 Nm. Top performance figures are the result: the Volkswagen reaches a speed of 60 km/h within 4.2 seconds, and after just 10.4 seconds the e-Golf is up to 100 km/h. A fascinating factor here is the pull-away performance, which is extremely comfortable and totally free of any delay. On the motorway the top speed levels off, electronically limited, at 140 km/h1.

The high-performance 12,000-rpm motor and, also developed by Volkswagen, the single-speed gearbox (EQ 270) with integrated differential and mechanical parking brake form a compact module. The motor/gearbox unit is made in Volkswagen’s components plant in Kassel, Germany.

Depending on route profile, driving style and payload, the driving range is between 130 and 190 km; at very low outdoor temperatures, driving range may lie below these figures. Good range will be ensured not only in fine weather but in the winter too by a newly developed, optional heat pump. Offered as an add-on module for the electric heating (high-voltage heater) and the electric air conditioning compressor, the heat pump utilises both the heat from the ambient air and the heat given off by the drive system components. In this way the high-voltage heater’s consumption of electric power is significantly reduced. Through use of the heat pump the e-Golf’s range increases in winter by up to 20 per cent.

The Golf Mk7 was developed from the outset as a version which could use an electric powertrain. By virtue of the innovative flexibility of the new Modular Transverse Matrix (MQB), on which the current Golf design is based, Volkswagen was able to integrate the lithium-ion battery in space-saving fashion within a stabilising frame in the vehicle floor (under the front and rear seats and in the area of the centre tunnel). Like the motor elements of the powertrain, the battery was also developed in-house at Volkswagen.

The e-Golf has a kerb weight of 1,510 kg, of which 318 kg are accounted for by the lithium-ion battery. It is made up of a total of 264 individual cells, which are integrated into 27 modules (each with six or twelve cells). The cells add up to a nominal voltage of 323 V. Battery capacity: 24.2 kWh. The battery is fitted at the front with a battery management controller (BMC), which performs safety diagnosis and monitoring functions and also regulates the temperature balance in the battery junction controller (the interface to the motor’s energy supply). When the car is not in use or in the event of a crash, power from the battery is automatically cut off.

As with the smaller e-up!, there are several different ways of charging the battery in the e-Golf. As the conventional solution, the charging cable supplied as standard with the car is plugged into a 230-volt mains electrical socket. The battery of the e-Golf is charged in this way at a charge level of 2.3kW of alternating current (AC) from the mains. If it is completely flat, it will be fully charged again within a maximum of 13 hours. As an optional extra Volkswagen is offering a wall box for the garage or carport. This charges at a level of 3.6 kW. If completely flat (which in practice is rare), the battery would thus be fully charged again after around eight hours. There are also public charging stations that ‘refuel’ electric cars at a power level of 3.6 kW. The e-Golf can also optionally be prepared for the combined charging system (CCS) using a DC power supply. In this case the Volkswagen can be recharged via special CCS charging stations at power levels of up to 40 kW, allowing the battery to be charged to 80 per cent in around 30 minutes. On the e-Golf the start of the charging process can be activated – immediately or delayed by programming the time – by pressing a button next to the charging socket under the ‘fuel cap’.

Two technologies of primary importance in relation to optimal utilisation of the vehicle’s energy are the two driving profiles designed for energy economy (‘Eco’ and ‘Eco+’) and the four different levels of regenerative braking (‘D1’, ‘D2’, ‘D3, and ‘B’).

The e-Golf is equipped as standard with three driving profiles: ‘Normal’, ‘Eco’ and ‘Eco+’. The Volkswagen is automatically started in ‘Normal’ mode. For drivers wanting to extend the range, the first option is the ‘Eco’ mode. The effects of selecting this mode include paring back the e-motor’s maximum power output to 70 kW and the starting torque to 220 Nm. In parallel, the electronics reduce the output of the air conditioning system and modify the response curve of the accelerator pedal. The e-Golf can now reach speeds of up to 115 km/h (in ‘Normal’ mode: 140 km/h1) and accelerate from 0 to 100 km/h in 13.1 seconds (in ‘Normal’ mode: 10.4 seconds). In ‘Eco+’ mode the electronics limit the power output to 55 kW and the starting torque to 175 Nm. At the same time the accelerator pedal response curve becomes even flatter and the air conditioning is switched off. The e-Golf now reaches a top speed of 90 km/h and accelerates at a correspondingly slower rate. Nevertheless, via kick-down – in ‘Eco’ and ‘Eco+’ mode – drivers can still obtain full power, maximum torque and a top speed of 140 km/h.

By developing very specific measures such as reducing the volume of cooling air (via a radiator shutter and partially enclosed radiator grille), new underbody panelling, modification of the tail with a rear spoiler and C-pillar air guides, and by developing new aerodynamic wheels (largely closing off the wheel openings flush with the car’s exterior), Volkswagen was able to lower the Golf’s air drag. Whereas on the standard Golf (1.6 TDI with 77 kW) air drag is 0.686 m², the company was able to reduce this to 0.615 m² on the e-Golf, thus improving it by 10 per cent. Similarly, the cD value was improved to 0.281.

Volkswagen was able to achieve another positive effect on energy consumption and range through optimisation of the tyres (205/55 R16 91 Q). Reducing the rolling resistance coefficient from 7.2 per 1,000 (Golf BlueMotion) to 6.5 per 1,000 for the e-Golf (likewise an improvement of 10 per cent) also improves the range.

e-exterior
Visually the unique, always four-door e-Golf can be recognised even from a distance by its especially energy-efficient all-LED headlights, being used here as a world first. Compared to xenon headlights the LED system produces more light despite consuming less power. From now on, an identifying feature of Volkswagen electric cars will be the C-shaped designer signature of the LED daytime running lights in the redesigned front bumper. At the rear, the latest Golf can be made out as a zero-emission car by such features as the absence of any exhaust pipes. In addition appropriate model name markings and the VW logo with a blue background also show that the e-Golf is a zero-emission vehicle. Also standard on the car’s exterior, as mentioned above, are LED rear lights and the aerodynamically perfectly balanced 16-inch alloy wheels with 205 tyres optimised for low rolling resistance.

e-interior
In addition to the specific fabric design (seats in the ‘Merlin e-grey / Clip titanium black’ pattern; optionally leather) and the extremely good level of standard equipment (incl. automatic climate control, parking heater/ventilation, high-end Discover Pro radio-navigation system, heated windscreen, leather steering wheel, leather gear knob and elegant ‘Iridium Matrix / Dark Magnesium’ trim) striking features in the interior of the e-Golf include the new instrument layout and the touchscreen in the centre console, which is also equipped with new functions. In line with the exterior, the interior is also enhanced by blue elements, including the decorative seams of the leather steering wheel and gear knob, plus the floor-mat edgings. As an option the so-called ‘Ambience pack’ creates a link with the world of ‘Think Blue.’: it contains LED reading lights, blue footwell illumination, blue ambient lighting around the decorative trim and, of course, door-sill tread plates also illuminated in blue.

e-instruments
On the left-hand side of the instrument cluster the rev counter is replaced by the power display (which indicates if the motor is ready, the battery is being charged via regenerative braking or power is being drawn off) and the indicator of output availability. Still on the right as a corresponding instrument is the speedometer, in this case going up to 160 km/h. Added to the bottom section of the speedometer is an indicator showing the charge level of the high-voltage battery. On the colour display (premium multifunction display) between the power display and the speedometer, features now include a permanent indication of the driving range, of the currently active level of regenerative braking and an indication of the remaining charging time and of the type of charging connection. In a separate LED field in the lower segment of the multifunction display, the ‘READY’ message also appears after starting the motor, indicating readiness for the car to be driven.

Using the ‘Car-Net e-Remote’ app it is also possible to make many settings and information requests via a smartphone or the Car-Net website.[wzslider height=”400″ lightbox=”true”]