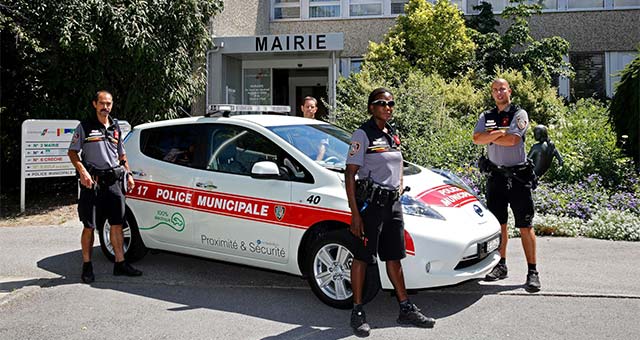 Emergency services in Portugal, France, UK and Switzerland have deployed Nissan LEAF EVs as community support vehicles, with a number of other countries considering making the switch to battery power in 2013.

“As well as helping to save the environment, vastly reduced fuel bills mean a fleet of Nissan LEAFs can make a serious contribution to a bottom line, making budget savings that can be reinvested in supporting the communities in which they serve.”

Fittingly, French community nurse Sylvie Lailler in June purchased the milestone 10,000th Nissan LEAF to arrive in Europe since sales began in March 2011. She uses her Nissan LEAF to make daily house visits to elderly patients near the north west of Paris.

Nissan LEAF has been chosen by the various first responders for differing reasons but all cite the car’s zero emissions credentials as the most important motivation for the switch from conventional petrol and diesel cars.

The first force in the world to go electric was Portugal’s PSP (Polícia de Segurança Pública), which has been running eight Nissan LEAFs as part of its Safe School Program for the last year. Fitted with blue flashing lights, sirens and clear ‘Polícia’ markings they can also perform other police duties at any time.

In the UK, West Midlands Police have placed an order for 30 Nissan LEAFs for use by its officers to visit victims of crime and attend other pre-arranged meetings as ‘diary cars.’ Averaging around 70 kms a day – well within a full charge range – these LEAFs allow the force to free-up its vehicle fleet for other vital crime-fighting duties.

The Police Municipal in the Swiss town of Meyrin, 10km north of Geneva, has also adopted the zero emissions car, which forms part of force’s daily patrol fleet in the local community.

In Scotland, the Scottish Police Services Authority (SPSA) has taken delivery of two Nissan LEAF electric vehicles for community work. As well as environmental gains, the force is keen to save money. The move not only saves SPSA money but also supports ambitious plans set out by the Scottish Government to become carbon neutral by 2050.

Meanwhile, to accommodate its new fleet of Nissan LEAFs, the UK’s County Durham Fire and Rescue Service has ensured its new headquarters currently under construction at Belmont, Country Durham, is EV friendly. Three charging points are planned as the service looks to further expand its environmental commitment by adding more electric vehicles to its fleet.[wzslider height=”400″ lightbox=”true”]