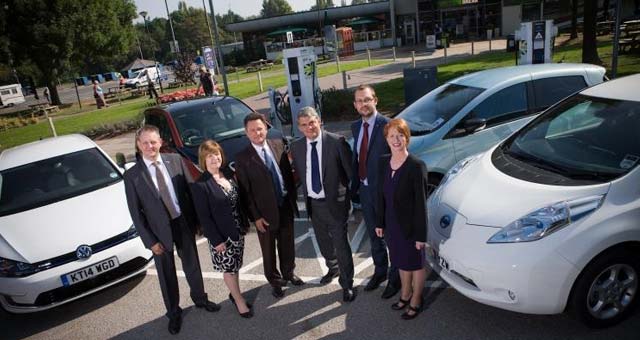 Nissan is leading a partnership of Battery Electric Vehicle (BEV) manufacturers in a joint project through the European Union’s Trans-European Transport Network (TEN-T) programme, to create a multi-standard and interoperable network through the United Kingdom and Ireland.

As well as helping to finance the €7+ million scheme, the consortium is providing other members of the project with the benefit of its extensive experience in the BEV field.

Nissan is joined in the project by BMW, VW and Renault: it’s the first time leading BEV companies have united to accelerate the growth of EV charging infrastructure, seen as a key enabler towards making zero-emission mobility a market reality. The project, managed by Zero Carbon Futures in Sunderland also draws on the network expertise of ESB, one of Ireland’s foremost energy company and leader of a previous TEN-T project completed this summer, and Newcastle University.

Running on two priority road axes on the mainland of the UK, the RCN will link major ports and cities including Stranraer, Liverpool, Holyhead, Birmingham, Felixstowe, Leeds and Kingston upon Hull. There will also be networks embracing Dublin, Ireland and Belfast, Northern Ireland.

Significantly, the rapid chargers are the latest state-of-the-art multi-standard units and are compatible with cars using 44kW CCS, 44kW CHAdeMO or 43kW AC systems. This will ensure that EV drivers travelling in the UK and Ireland can undertake long journeys secure in the knowledge that they will never be far from a rapid charger.

Ten rapid chargers have been already installed with a further 28 sites soon to be commissioned. The start of the project’s deployment was officially marked on 9 September 2014 at a ceremony at the Corley Services on the M6 motorway in Coventry, UK.

The UK RCN is part of the European Union-financed Trans European Transport Network (TEN-T) and represents a substantial partnership investment of €7,358,000, half of which is being funded by the EU.

Nissan is leading the BEV manufacturers’ contribution to the overall costs, a significant portion of which will be used to fund a research programme, led by Newcastle University. This will aim to confirm the benefits of such an advanced interoperable EV rapid charging network.

Strategic information gathered from users, including customer charging behaviour and changes in mobility patterns, will help plan the roll-out future of rapid charging infrastructure in member states across Europe.

The project is co-funded by the European Union’s TEN-T Programme, which aims to improve transport infrastructure across Europe and will run on the European Union’s two priority axes. It was among the 172 projects selected from the 2012 Call for funding which will help realise TEN-T network development and aid European Transport in moving to a more sustainable future.