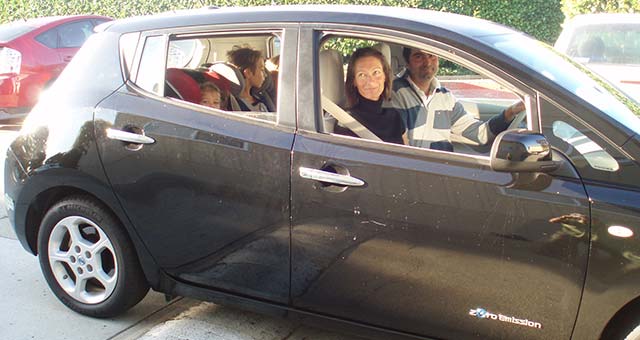 Olivier Chalouhi bought the very first all-electric Nissan LEAF sold in the world.  He lives in Northern California, and he placed his order online just after midnight on Aug. 31, 2010 when reservations opened for the car.

He completed the purchase a few months later at Northbay Nissan in Petaluma, Calif.

He has had his Nissan LEAF now for three years.  He and his wife have also grown their family to now include three children.

“You can put three kids in the car with no problem, which is great when you have three kids,” said Chalouhi.

Chalouhi first bought the Nissan LEAF because of the environment; but he said he has different motivations for driving electric now.

“The way it drives, the silence and the comfort you get from an electric car that would be the primary choice today.  And there’s an added benefit that it’s good for the environment,” said Chalouhi.

Commuting to and from work, dropping his children off at school and running basic errands is a typical day.  Chalouhi said he usually drives less than 50 miles a day.  He has gone more than 30,000 gas free miles in nearly three years.

“99 percent of what I do is going back and forth to work and dropping the kids and doing some errands. And that, the car does, and I know it does because I have done it for three years,” said Chalouhi.

But even when the Chalouhi family is traveling longer distances, they prefer taking the LEAF.  They plan the trip in advance to find fast chargers.

He no longer feels like a loner in his LEAF.  In fact, many of his friends and co-workers made the switch to electric after test driving Chalouhi’s Nissan LEAF. “I have a friend who decided to buy one after trying mine,” said Chalouhi.

Chalouhi thinks “word of mouth” is likely the biggest factor for increased sales.  Nissan has now reached more than 35,000 cumulative U.S. sales, and there are now more than 78,000 LEAFs on the road world-wide.  Chalouhi said in time he expects more and more people to follow his lead.