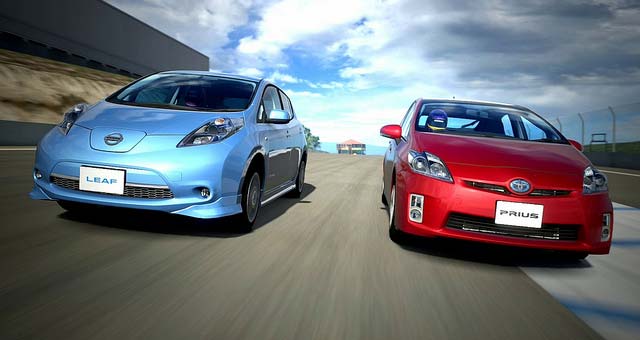 The report gauges the gap between public perception of a brand’s environmental performance – its “green image” – and its actual environmental practices, using publicly available data and information.

More than 10,000 consumers around the world have recognized Toyota not only for its commitment to sustainable environmental leadership, but also for its investment in ground-breaking products.

According to the report, Toyota is losing ground to auto rivals Nissan, Ford, and Honda in overall environmental sustainability performance, but leads them in perceived performance thanks to a single sub-brand: the Prius, with more than 2.9 million models sold worldwide in 2012 (1.2 million in the US alone).

It scores #1 for perception in its home country, where it’s exploring the future of mobility at the Toyota Ecoful Town, a low-carbon pilot project in Toyota City, Japan. The world’s biggest auto maker—and Asia’s biggest manufacturer—aims to produce even more efficient, cleaner-emitting cars and further reduce its operational impact. It’s rolling out more than 20 new hybrid models in the next three years (including a refreshed RAV4 EV this year) and a full hydrogen car in 2015, while developing new fuel-cell technologies, lithium-air batteries, and LED lighting technologies.

Operationally, Toyota reduced greenhouse gas emissions and energy and water consumption, and kept millions of pounds of cardboard and wood out of landfills by using reusable metal containers for shipping and distribution. Partnerships such as TogetherGreen with the US National Audubon Society also help build goodwill with consumers.

The UK makes a significant contribution to Toyota’s global green profile, with Toyota Motor Manufacturing UK (TMUK) being the country’s first automotive plant to be awarded ISO 14001 certification for its environmental management systems. Its Burnaston factory was Toyota and Europe’s first centre for hybrid vehicle production and is also the site of one of British industry’s largest solar panel arrays, a sustainable energy installation that can generate enough power to build the equivalent of 7,000 cars a year.

Elsewhere in Europe, Toyota is addressing the mobility challenges of the future with a trial program running electric vehicles in Grenoble, France. The self-service car sharing project will use around 70 ultra-compact urban electric Toyota vehicles, including the TOYOTA i-ROAD, working in conjunction with existing public transport systems to reduce overall emissions generated by commuting.

As local manufacturing of the Nissan LEAF gets underway in Europe and the United States, the story of the car is beginning to shift from a product with potential to one with visible commercial momentum, with 25,000 cars sold in the US and KBB naming it the Best Green Car of 2013.

Beyond electric vehicles, Nissan is also supporting its hybrid line-up with four new cars in the US and pushing on diesel products, as well. Committed to reducing the impact of its vehicles even further, Nissan plans to cut 15 percent of vehicle weight starting in 2017 with newly developed 1.2 gigapascal steel technology. This new technology will help make cars lighter, resulting in less fuel consumption and lower CO2 emissions. Adding to its zero-emission goals, Nissan has also joined forces with Daimler and Ford to develop a line of affordable fuel-cell cars that will roll out in 2017. Nissan learned a lot and absorbed a bit of criticism in 2012, but its brand stewards stayed focused and found a way to keep moving forward.