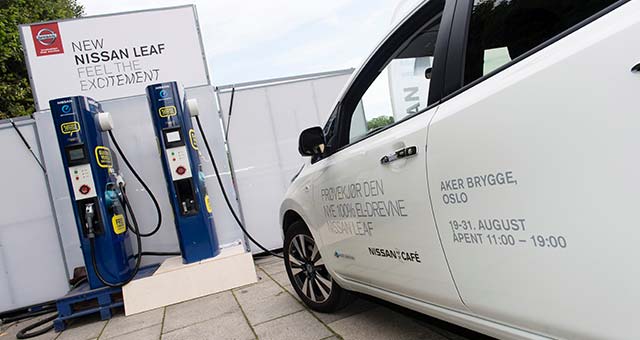 The record attempt is set to cement Norway’s place as the number one market for the Nissan LEAF and other electric vehicles.

The two Norwegian EV organizations are planning what is hoped to be the biggest gathering of EVs in one place at the same time, with more than 225 needed to set a new world record. Alongside the customers taking part, Oslo city council will be receiving 1000 electric vehicles to add to their municipal fleet over the next three years – a great number of which will include the Nissan LEAF.

The event, which starts from Maridalen in outer Oslo and finishes outside Oslo’s Town Hall, requires all the cars to be moving at the same time over a 5km section of a prescribed route. Monitoring of the attempt will be carried out by a pair of camera-carrying drone aircraft.

Although open to all electric vehicles, it is expected that the world’s best-selling EV, the Nissan LEAF, will make up the majority of the participating cars. Everyone joining the attempt will be given an official certificate of participation.

A Nissan Pop-up Café will appear in the city in the week leading up to the attempt and will act as a ‘recruitment center’ encouraging participation in the world record attempt. Nissan will also be operating a Test Drive Hub in the city from August 19-31; located near to Oslo’s Town Hall, home to the Nobel Peace Prize, where existing owners and the general public can experience the second generation Nissan LEAF, complete with more than 100 important changes and improvements.

The Pop Up Café will also kick start Nissan’s challenge to reach One Billion Electric kms by 1st January 2015-  as the company aims to encourage more consumers to join the EV revolution.  Kilometres covered by existing Nissan LEAF owners and from test drives will all count towards the One Billion goal.

Alongside the Nissan LEAF, visitors to the Pop-Up Café will also get to see the new Nissan NOTE and experience an interactive demonstration of the Nissan Safety Shield technology which, through sensors in the floor, responds to visitors’ movement with audio and LED lighting around the vehicle.

Visitors will also be able to experience the WAZE application,  join the Nissan NOTE community via iPads and get up close to the Nissan ZEOD RC, the world’s fastest electric racing car prototype that will make its race debut at next year’s Le Mans 24 Hours.

The Nissan LEAF is easily the country’s most popular EV and is regularly in the country’s top five best-selling cars each month. One of its major attractions – available only through Nissan dealers – is the special Nordic Pack, developed to tackle the country’s harsh winters. As well as the expected heated front and rear seats, steering wheel, door mirrors and headlamp washers, the Nordic Pack includes a battery heater to counter the extreme low temperatures.

The Nordic pack has been specially engineered for Europe’s coldest region as Senior Nissan LEAF Development Engineer, Tom McCabe explains: “Most of Europe experiences cold weather, but Norway and the rest of the Nordic region experiences persistently very low temperatures every winter. For this reason we engineered an automatic battery heater to ensure customers had the best experience of the car even at extreme low temperatures. This is fitted alongside the features normally found in the ‘cold pack’ in other countries, but only the Nordic pack cars get the specially designed heater.”

Norway continues to be a world leader of zero-emission mobility with more than 3,900 EVs sold in 2012, accounting for a remarkable 2.9 per cent of the country’s total new passenger car market. Despite Norway’s comparatively small size, the country has a comprehensive recharging network with more than 3,500 public charging posts and 100 fast chargers.

Norwegian EV owners benefit from a number of incentives including exemption from sales tax, free city centre parking and even the ability to drive in bus lanes. And with over 90% of the country’s electricity produced from renewable sources EVs like Nissan LEAF are making a significant contribution to reducing the country’s carbon footprint.[wzslider height=”400″ lightbox=”true”]