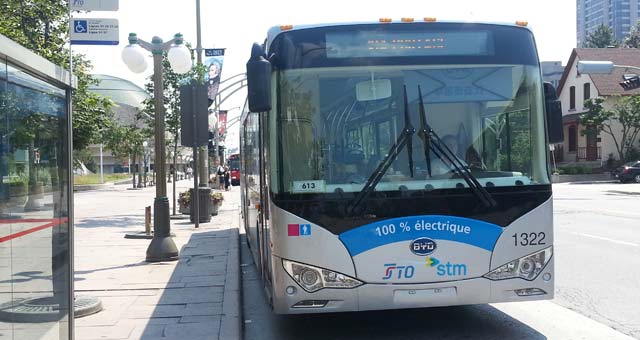 The BYD electric bus is now operating in revenue service on the public streets of the Capital City of Canada and Montreal.

Initial full-revenue, service and field testing will run for approximately 10 months, starting with the STO from this July on routes into the Capital City of Ottawa next to Parliament Buildings at Rideau Centre and also on routes 41, 49, 51, 52, 53, 57 and 59 in the Aylmer sector.

In Montreal, the BYD electric bus will operate until May 2014 along routes in different sectors on weekdays, especially in the winter. It will be instrumented and assessed on different types of routes with varying slopes, frequent stops and high ridership.

BYD’s electric bus can drive for 250 km (155 miles) even in heavy city traffic after a full, 5 hour, night-time charge. The ebus is a proven, full-size 12 meter (40 foot) bus which has completed more than 17 million kilometers (10.6 M miles) in revenue service and has been evaluated in many major cities across the world.