Nissan Leaf Will Be Sold In Brazil 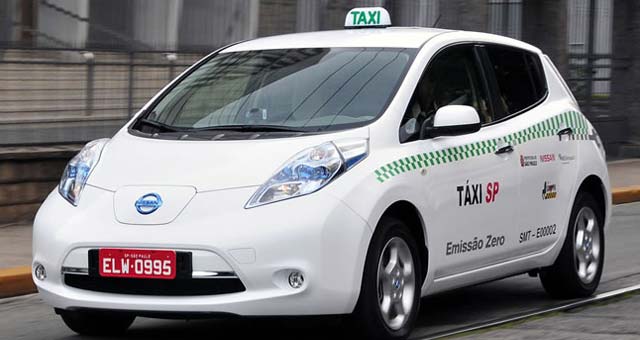 The electric vehicles sector in Brazil walks the Tortoise walk. Brazil has nothing to lose and much to gain from the regulation of electric mobility. However, little has been done to get the country in the hybrid and electric vehicle manufacturing club.

There are five bills underway in Brasilia and, recently, the government changed the rules of Innovate-Auto, requiring greater energy efficiency of combustion engines in 2017. However, such a change is very small to make the segment of hybrid and electric vehicles hit the streets.

There are many people interested in buying electric cars, but the only model sold in Brazil is the Mitsubishi i-MiEV, which costs around R$200,000 (approximately US$93,700). Naturally, the client doesn’t want to pay more for an electric car.

However, as soon as possible, there will be a new competitor in the Brazilian market. Anderson Suzuki, Nissan Brazil New Business Manager, said to VerdeSobreRodas that the Leaf is in the process of approval and, if all goes well, early next year, it will be available in dealer network.

The lack of models is not the only problem in Brazil. There is no investment in infrastructure (such as the lack of charging stations), any production and sale encouragement, no consumer enlightenment and especially there is no appropriate fiscal policy. None of this is possible without the federal government regulations.

Since there are apparently few interested in electric and hybrid vehicles in Brazil, it is difficult to imagine that the Manufacturers Association – Anfavea, would want to fight for this cause. Hence, still remains the option of each part defending its own interests, and in this case, the solution may take a while.

Asked if electric vehicles could soon come to an end, since we had some casualties, such as CODA, Fisker Automotive and Better Place, Anderson said that the present moment is very different from the last failed attempt to mass-market electric vehicles. “Currently, the industry has a lot more technology to make electric cars with the features consumers are demanding,” added Anderson.

The fact is that Renault-Nissan alliance has a very important role in order to make Brazil open the doors to electric mobility. The Renault-Nissan Alliance is the global leader in electric car sales. Nissan, more than any other brand, has given demonstrations that the EV segment is very important for the brand, so much so that in unprecedented movement, it has named Jean Pierre Diernaz the director of electric cars in Europe. Nissan is the only automaker to have this position.

Globally, Nissan has clearly demonstrated that, in terms of electric mobility, its focus is on the corporate market, government fleets and taxi segment. The Alliance knows very well that align their products with the image of sustainability is fundamental to promoting brands. Furthermore, the strategy of focusing on a few sectors globally, can give the scale it needed to give EVs competitively prices.

Also, focusing on government as main customer is at least a powerful and intelligent strategy, with all chances of being successful, because no public leadership would want to stand against sustainable transport. In addition, government agencies are exempt from taxes and fees. Thus, the price of the EV is more attractive, which does not happen with the final consumer, who pays all the taxes.

Finally, to achieve success in the EV and hybrid segment Renault-Nissan Alliance has the support of other auto industry heavyweights such as Toyota, Mitsubishi, Honda and others. The question is no longer whether or not electric mobility will catch on, but when it will occur in Brazil.