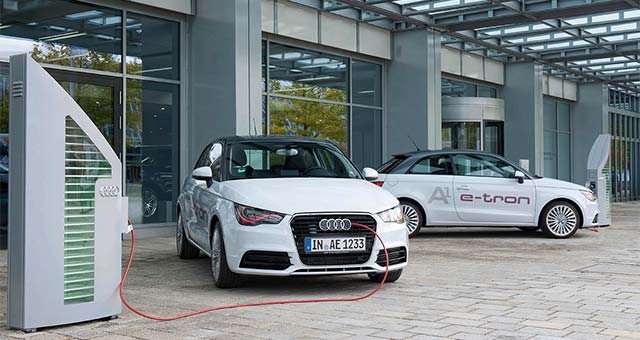 Audi has deployed 80 of its A1 e-tron plug-in hybrids into the German federal government’s Electromobility Showcase initiative.

The next generation of the Audi A1 e-tron is more powerful. The electric motor drives the front wheels via a single-speed gearbox and produces 85 kW of peak power and maximum torque of 300 Nm (221.27 lb-ft). The sprint from zero to 100 km/h (62.14 mph) only takes 9.8 seconds; its acceleration ends at a governed top speed of 130 km/h (80.78 mph). The developers have further improved the electronic stabilization control (ESC) and the selection of the five recuperation levels.

The T-shaped lithium-ion battery in the Audi A1 e-tron stores 13.3 kWh of energy for an electric range of roughly 50 km (31.07 miles). It can be fully recharged in around three hours on a 220 V household outlet. An extremely compact and lightweight single-disc rotary engine in the rear of the car extends the range to a total of 250 km (155.34 miles). The range extender, which has a chamber capacity of 354 cc and produces 25 kW (34 hp), drives a generator to recharge the battery. It is not mechanically linked to the front wheels.

Audi is deploying 80 A1 e-tron models in the Electromobility Showcase. In the six individual projects in which Audi is taking part, the participants will probably drive around one million kilometers (621,371.19 miles). In each instance the brand operates with local partners.

Audi is launching the “Intelligent Charging” project with five cars at its Ingolstadt headquarters in June. The focus here is on a system for controlling the charging and communication infrastructure. 13 intelligent charging stations – five in the participants’ garages, four in Audi parking garages and two charging stations downtown operated by Audi’s project partner Stadtwerke Ingolstadt – communicate with the trial participants’ smartphones. Participants can look up and reserve the closest station or remotely check the battery’s charge.

In the first phase of the “E-NUE” project in Nuremberg, Audi is providing N-ERGIE Aktiengesellschaft with five Audi A1 e-tron models for both business and personal use by its employees. Audi will provide one Audi e-tron to each of five additional companies in the Nuremberg area in a second project phase. These cars are also intended for both business and personal use.

The “Commuting and Charging” project in Berlin with 25 of the compact electric cars is structured similarly. The users are commuters living or working near Potsdamer Platz. Audi offers them a customized service concept.

The activities in Berlin and Nuremberg are starting this summer.

Audi is addressing a special group of customers with the “E-Plan” project about to start in Munich. The company is loaning an A1 e-tron to 15 private participants residing in the pre-WW II neighborhood of Schwabing, where they have to park on the street and are thus dependent on the public charging infrastructure.

“[email protected]” is the name of another project launching in Garmisch-Partenkirchen in late summer to study how the Audi A1 e-tron can work together with private power generation: The homes of the participants are equipped with photovoltaic systems. The wall box for the car, which is installed in the garage, adjusts the charging process according to the amount of sunshine, the time and the priority of the users. A further aspect is the simulative incorporation of used car batteries as stationary storage.

In April 2012, the German federal government chose four regions in Germany as “electromobility showcases” and subsidizes alternative drive system research and development in accordance with a resolution of the German Bundestag. The federal government is providing a total of €180 million in funding for the showcase program. The large-scale regional demonstration and trial programs will test the interface between electromobility and the energy system, vehicle and transportation system.