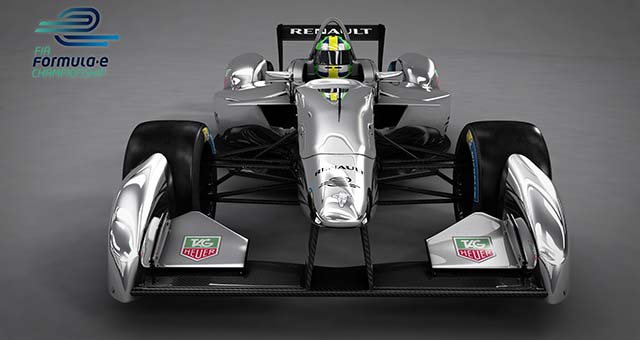 TAG Heuer has signed on as Official Timekeeper, Official Watch and Chronograph and Founding Partner of the FIA Formula E Championship.

The agreement was signed at TAG Heuer’s headquarters in La Chaux-de-Fonds, Switzerland by Jean-Christophe Babin, President and CEO of TAG Heuer and Alejandro Agag, CEO of Formula E Holdings.

TAG Heuer Professional Timing, the timekeeping division of the renowned Swiss brand, will provide all live timings for the Championship’s inaugural season, which will take place on 10 street circuits worldwide including London, Rome, Los Angeles, Miami, Rio de Janeiro, Buenos Aires and Beijing. TAG Heuer will also be the exclusive watch brand to appear on track signage at all cities around the world.

“Teaming up with Formula E, the world’s top competition for electrically-powered racing cars represents the next logical step for TAG Heuer’s ongoing commitment to motor sports, as it draws on both our racing heritage and our commitment to sustainability,” said Jean-Christophe Babin.

TAG Heuer has also been deeply involved in sustainable development for years, with for example solar roofs providing electricity in our Swiss facilities. We have an ongoing partnership with Leonardo DiCaprio and Green Cross international’s ecological initiatives. In 2010, we organised with Tesla the very first ever world tour in a 100% electric GT car and in 2011, we signed on with the Electric Masters Kart in Paris Bercy. So Formula E is a natural fit.”

Spark-Renault SRT_01E. Capable of reaching 0-100kph in less than three seconds, the futuristic looking single-seater is currently under construction by Spark Racing Technology with Renault Technical Partnership. Leading Italian firm Dallara will produce the chassis while tyres will be supplied by the Championship’s Official Tyre Partner Michelin.[wzslider height=”400″ lightbox=”true”]