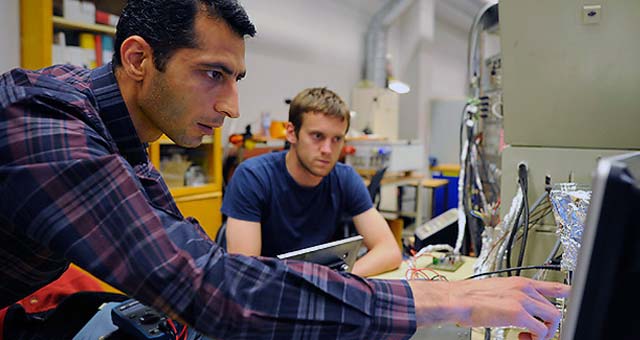 Researchers at Chalmers University of Technology have developed a unique integrated motor drive and battery charger for electric vehicles.

Compared to today’s electric vehicle chargers, they have managed to shorten the charging time from eight to two hours, and to reduce the cost by around $2,000.

Saeid Haghbin, doctor of electric power engineering, undertook his doctoral studies in order to develop the optimal electric vehicle charger. The result is a novel high-power integrated motor drive and battery charger for vehicle applications, where a new power transfer method has been introduced involving what is known as a rotating transformer.

“The ideal scenario would be to have a charger powerful enough to charge a car in five to ten minutes, but this would cost over $100,000, which is more expensive than the car itself,” says Saeid Haghbin. “The question we posed was: how can we reduce the size, weight and price of the on-board charger.”

Model of the integrated motor drive and battery charger. The image shows a plug-in hybrid electric vehicle, which also has a fuel tank and a combustion engine, but the technology system works equally well with a purely electric vehicle.

“Instead of having a separate isolated battery charger, we introduced a new concept for the power transfer, the rotating transformer, which was developed to transfer electric power while rotating,” says Saeid Haghbin. “The battery is charged through the transformer and a split-phase electric motor that was especially designed for this purpose.”

The Chalmers integrated charger is, from a university perspective, still on laboratory level. To achieve a more optimal system, further investigations and experimentation are necessary. However, the product has resulted in both a Swedish and an international patent.

Chalmers is trying to find a potential industrial user, and Volvo AB is working on the concept for further enhancement to be used in its system.

“Electric cars have been discussed as a possible solution to reduce carbon emissions for a long time, but scientists debate whether this mode of transportation is the future or not,” says Saeid Haghbin. “If we manage to solve the main problems with the battery and the battery chargers, I think the electric vehicles will succeed. And in general, I think electric transportation will become more common in the future, for example trains, trams and plug-in hybrids.”