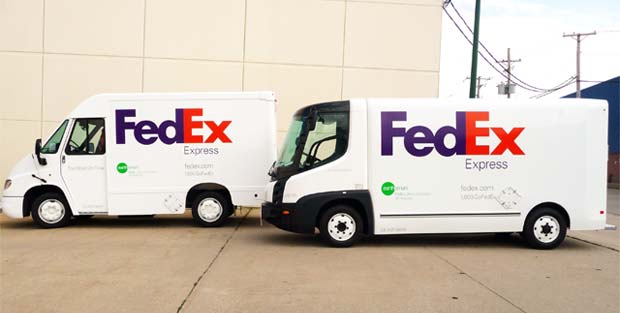 The company’s significant progress is the result of a number of initiatives:

• Upcoming addition of 87 all-electric trucks to its green fleet bringing the all-electric vehicle count to 130.
• Acceleration of its efforts in fuel conservation through the purchase of vehicles with right-sized engines like the Sprinter vans manufactured by Mercedes-Benz. By the end of FY13, FedEx will have more than 11,000 such vehicles in service, more than 35 percent of its U.S. pick-up and delivery fleet. Each Sprinter-type van is about 70 to 100 percent more fuel-efficient than the original truck it replaces.
• Addition of 114 Reach composite-body trucks manufactured from advanced materials by Utilimaster on an Isuzu Motors chassis with an appropriately-sized engine. The lower weight design, along with the engine, is expected to save up to 35 percent in fuel over most conventional walk-in vans.
• Testing of FedEx Ground hybrid hydraulic parcel delivery vehicles that can reduce fuel usage by 40 percent.
• Testing of six standard delivery vehicles retrofitted with all-electric drivetrains from various suppliers, including AMP, Smith Electric and Freightliner Custom Chassis Corporation.

The electric truck initiative is aimed not only at improving FedEx fleet efficiency, but also in accelerating the development of all-electric trucks that could compete favorably with traditional vehicles for all users. “While we naturally want to improve performance and reduce costs for FedEx, we also want to see all-electric trucks become more affordable and reliable for everyone from your local pizza parlor to other small businesses that deliver,” said Mitch Jackson, staff vice president of environmental affairs and sustainability, FedEx Corp. “This is a strategy for reducing reliance on petroleum-based fuels in a much faster, more inclusive and impactful way.”

The new FedEx all-electric (EV) vehicles are being deployed in the next few months in numerous locations which include California (the San Francisco Bay area, Los Angeles, Orange County, San Diego and the Central Valley); suburban Washington, D.C. (Rockville, M.D.); New York City and several locations in Texas. In Chicago, FedEx is testing electric trucks from several manufacturers head-to-head in daily service to accelerate the development of the vehicles and the EV industry.

Fleet users present an added advantage for all-electric technology, since electric trucks can operate during the day and charge overnight when utilities have spare capacity. FedEx Express is currently working with General Electric and Columbia University on a project in New York City to optimize charging facilities for all-electric trucks.