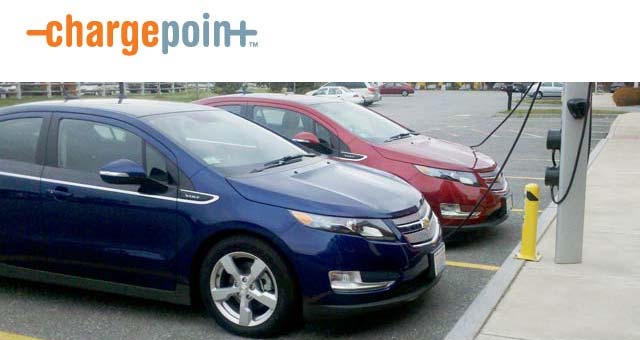 ChargePoint and National Grid today unveiled the first of what will be many electric vehicle charging stations funded through a $1 million award from the New York State Energy Research and Development Authority (NYSERDA).

The ChargePoint EV charging station, which can charge two cars at once, has been installed at the Homewood Suites on Wolf Road in Colonie. It was unveiled today at a ceremony featuring Pat Romano, president and CEO, ChargePoint; Bill Flaherty, regional executive, National Grid; Francis J. Murray Jr., president and CEO, NYSERDA; and Brian Straughter, vice president, Turf Hotels.

This public/private partnership, which supports Governor Andrew M. Cuomo’s Charge NY program, will provide more than 80 EV charging stations throughout New York State, of which 67 will be located in National Grid’s service area in upstate New York. ChargePoint and National Grid will be providing an additional $550,000 for the cost of this program.

New York has one of the highest growth rates of electric vehicles in the country. With nearly 4,000 vehicles registered today, according to New York State Department of Motor Vehicles, the number of EVs in the state has tripled in the past year.

Earlier this year, Governor Cuomo announced Charge NY, a new initiative to promote EVs through investing $50 million over five years. The program calls for installing 3,000 public and workplace charging stations by 2018, plus other steps meant to encourage the growth of electric vehicle ownership.

“New York is laying the foundation to be the largest EV market for electric vehicles on the East Coast,” said Pat Romano, president and CEO of ChargePoint. “We are proud to be working closely with National Grid, the only East Coast investor-owned utility that has made this kind of commitment to EV infrastructure in the United States. NYSERDA continues to support Governor Cuomo’s visionary plan to ‘Charge NY,’ which calls for ramping up investment in EV charging stations around the state.”

”The collaboration among NYSERDA, ChargePoint, and National Grid is a model of a public-private partnership working for New York State and the environment,” said Bill Flaherty, regional executive of National Grid’s Eastern New York division. “Plug-in electric vehicles are more than just a new way to get around. They’re a major part of a cleaner, more efficient transportation future. At National Grid, we’re committed to making this new technology more viable and cost-effective for ourselves and our customers, and pleased to help make it happen in Eastern New York and across New York State.”

“Governor Cuomo’s ‘Charge NY’ program is developing an EV charging infrastructure across the state that will encourage and accommodate consumers in the purchase of electric vehicles,” said Francis J. Murray Jr., president and CEO, NYSERDA. “The investment being made through this public-private partnership will not only lead to a reduction in emissions from the transportation sector but will help stimulate economic activity.”