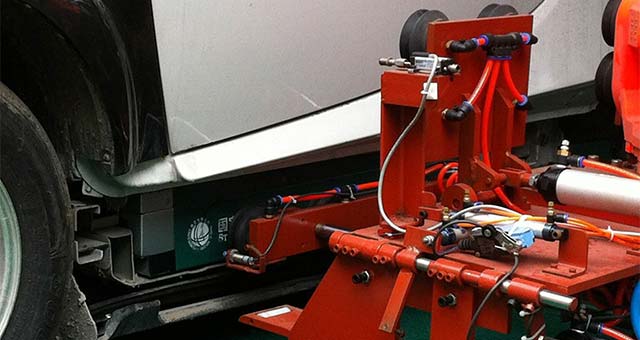 ZAP announced that the battery Swap version of the E380 SUV has been approved by China National Grid for its battery swap stations in China, based in Hangzhou, Zhejiang Province.

The Battery Swap Version of E380 SUV (Model E380-S) was designed specifically to work with the robotic system used for battery swapping as specified by China National Grid (C-NG).

The battery packs that are used have been standardized to fit the robotic arm and also the recharging cabinets in the government funded charging stations that are being deployed by China National Grid.

Generally, the swap out and replacement takes no more than 6 minutes to complete. In order to stimulate the adoption of electric vehicles, C-NG is promoting the sale of electric vehicles without including the cost of the lithium batteries, and the batteries will be leased from C-NG or authorized funding partners.  This business model is being adopted by taxis in Hangzhou, and also by a number of leasing companies that are working in partnership with C-NG.  The electric vehicles could be leased to owners and paid over a period of several years and the cost of the batteries is financed by C-NG and amortized over that period of time.

ZAP Jonway’s E380-S, developed by ZAP Hangzhou Joint Venture was done in collaboration with China National Grid’s engineers and is an alternative model to the E380 SUV that was type approved in January 2013. This E380-S model will undergo type approval in the battery swap configuration. As a follow on product to the E380, the type approval will take shorter time than the first one and the plan is to complete this by the end of this summer.  The target market will be taxis and leasing companies where fast battery swap-out is needed to give quick turnaround for a “refill”.  ZAP Hangzhou JV team is working with a few leasing companies to potentially offer financing to taxis and interested buyers.

The robot and the automated battery swap and recharge station are compact and were designed to easily fit into an existing gas station. This automated system was designed by C-NG’s engineering team, and C-NG plans to make this available for the international markets as well.  By standardizing the removable battery packs that fit with the robot arm, C-NG has simplified the EV designs and thus accelerated the advancement and adoption of EV in the auto industry in China.[wzslider height=”400″ lightbox=”true”]