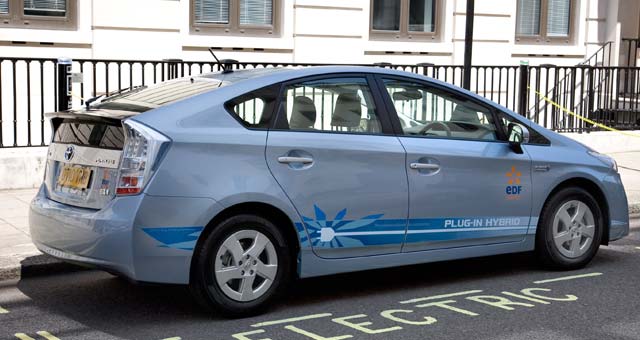 Toyota Motor Corporation has completed its three-year plug-in hybrid vehicle demonstration project jointly carried out with Électricité de France (EDF) and the City and the Urban Community of Strasbourg in France.

At a ceremony held in the city to mark the demonstration project’s completion, Michel Gardel, vice-president of communications and external and environmental affairs at Toyota Motor Europe NV/SA, TMC’s regional headquarters in Europe, said: “Thanks to the participation from the citizens of Strasbourg, Toyota was able to acquire valuable data for the further promotion of plug-in hybrid vehicle (PHV) technologies.  Based on the results that were obtained from this demonstration project, we intend to offer technologies more accessible for widespread adoption.”

This demonstration project, in which approximately 70 units of the Prius PHV were provided to Strasbourg, began in April 2010.  Empirical data was accumulated by utilizing the 145 dedicated charging stations that were installed in the city by EDF to identify vehicles and exchange information.  The vehicles travelled more than a total of 4 million kilometers during the three-year period, with resulting data showing that, with just 1.1 charges per day, fuel consumption was decreased by an average of 46 percent compared to gasoline-engine vehicles of the same size.

The Prius PHV, which was launched in 2012 following the application of data gained from various demonstration projects, has sold approximately 30,000 units cumulatively worldwide.  Based on the belief that environment-friendly vehicles can only truly contribute to the environment if they are used widely, TMC is making full-scale efforts to promote PHVs—which help reduce fossil fuel consumption and CO2 emissions by using electricity—as the pillar of next-generation environmental vehicles to follow gasoline-electric hybrid vehicles.