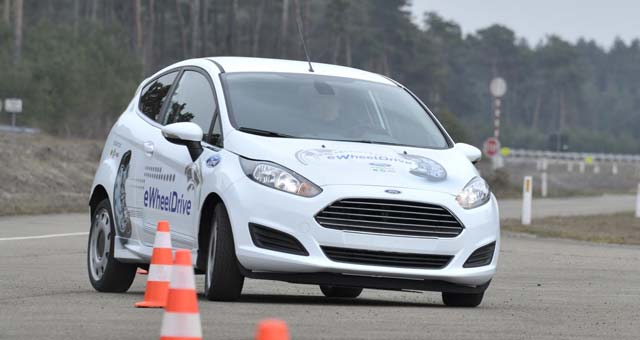 Ford and Schaeffler demonstrated the Fiesta-based eWheelDrive car, a driveable research vehicle that could lead to improvements in urban mobility and parking by making possible smaller, more agile cars.

Powered by independent electric motors in each of the rear wheels, eWheelDrive technology offers space under the bonnet that in conventional cars is occupied by the engine and transmission, and in electric cars by a central motor.

This technology could in the future support the development of a four-person car that only occupies the space of a two-person car today. At the same time, eWheelDrive steering system designs could enable vehicles to move sideways into parking spaces – a potential breakthrough as cities become more populated and congested.

With in-wheel motors, the components required for drive, deceleration and driver assistance technologies are installed in an integrated wheel hub drive – including the electric motor, braking and cooling systems.

Ford joined the project led by Schaeffler, the leading German-based automotive component manufacturer and supplier, to investigate the potential for future vehicles that also could offer zero emissions, and more space for features such as additional protection zones.

Ford will next partner with Schaeffler, Continental, RWTH Aachen and the University of Applied Sciences, Regensburg, on project MEHREN (Multimotor Electric Vehicle with Highest Room and Energy Efficiency) to develop two new driveable vehicles by 2015. The project aims to increase the integration of in-wheel motors in a car and will look at vehicle dynamics control, braking, stability and the fun-to-drive factor.[wzslider height=”400″ lightbox=”true”]