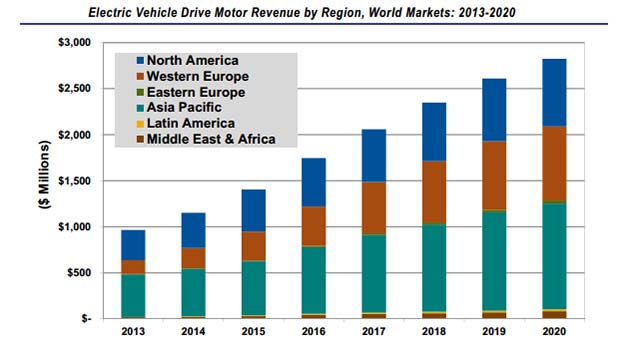 Electric motors and their controllers are an important but often secondary consideration in the cost premium of electric vehicles.

Today, new electric motor technologies are being developed by many automakers and their supplier partners in an effort to gain advantages in performance and efficiency, just as they have done for years with their internal combustion engines.

According to a new report from Navigant Research, unit sales of electric drive motors will reach 3.7 million by 2020, growing from 1.5 million in 2013.

Navigant forecasts that the global market for electric drive motors in light-duty vehicles will grow from a little less than $1 billion in annual revenue in 2013 to more than $2.8 billion in 2020.

The Eastern European and Latin American markets are expected to remain small in terms of electric vehicle drive motor revenue over the forecast period. Meanwhile, the Middle East & Africa will show steady growth, but will still remain a fraction of the value of any of the big three – North  America, Western Europe, and Asia Pacific.

Revenue in North America will not grow as fast as the other two major regions because the vehicle mix will continue to be led by hybrid rather than plug-in or battery electric vehicles.

Hybrid technology offers the North American consumer better fuel economy, but retains the ability to handle frequent long trips. In addition, the technology can be added to the larger type of vehicle that is popular in North America.