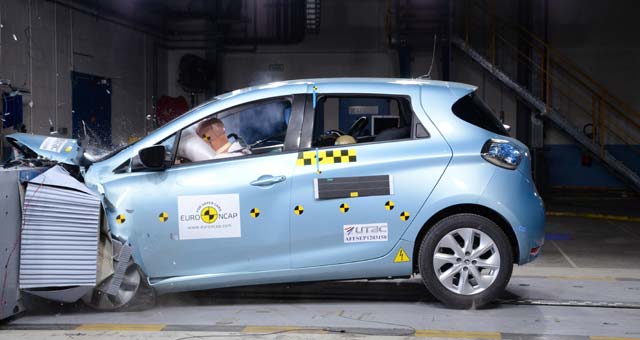 Renault ZOE has been awarded a five-star rating following the passive safety tests carried out by Euro NCAP, despite the harsher noting system introduced by this independent body in January 2013.

Renault ZOE obtained an overall score of 82 percent (including the maximum rating for pedestrian safety) and consequently figures among the very best models in its segment.

In addition to this formal recognition, Renault ZOE is an eloquent ambassador of the Fix4sure system and delivers reassuring dynamics thanks to its precise, responsive chassis. As an electric vehicle, it is equipped with a system that provides an audible warning of its approach. The sound emitted was developed in association with organisations for blind and visually-impaired people.

Renault ZOE’s safety performance is amply comparable with that of an internal combustion-engined vehicle, confirming its status as a genuine car.

Renault ZOE shares the same platform as New Clio, so it was only normal for it to target the same high level of safety as the celebrated internal combustion-engined supermini. To achieve this result, Renault has developed solutions that take on-board its extensive research into real-world accidents and driving behaviours to ensure the protection of all occupants. To guarantee even more effective protection, its electronic architecture was designed to ensure that its latest-generation protective systems are triggered extremely quickly.

Adult occupant protection
In a head-on impact, Renault ZOE’s front occupants are protected by two high-efficiency airbags, as well as seat cushion airbags, along with seat belts equipped with pretensioners and load limiters set at 400daN.

At the rear, all seats are equipped three three-point seat belts, plus load limiters for the two outer seats.

Meanwhile, Fix4sure technology is a Renault innovation that has been developed to combat submarining (whereby passengers slide beneath their seat belt in a head-on impact). All Renault ZOE’s occupants are protected against this phenomenon thanks to a special hump in each seat cushion, as well as by the low position of the seat belt buckles, along with seat cushion airbags for the driver and front passenger.

Because the sides of a car benefit from relatively less protection, side-on impacts are a frequent cause of fatal injuries, but specific work has produced spectacular results to achieve the maximum score of eight points. To respond up to twice as quickly, Renault ZOE features two side-impact detection sensors (in the front doors and at the foot of the B-pillars). A specific algorithm adjusts the speed at which the new-generation head-thorax airbags are deployed to match the severity of the impact.

Combined with the results of the pole and rear impact tests, this score helped Renault ZOE to obtain 32 points from a possible 36 for adult protection, which is one of the best results ever obtained in the small car segment.

Child protection
Thanks to the overall design of its structure and the availability of three-point Isofix child seat anchorage for the front passenger seat and outer rear seats, Renault ZOE’s child protection rating figures among the very best in the B segment with a score of 39 points out of a possible 49, despite the fact that the evaluation procedure’s severity has been stepped up.

Renault ZOE: segment leader for pedestrian protection
The front end of ZOE was designed to minimise injury to pedestrians. The bumper has no salient edges, while the lower part of the windscreen, which is traditionally very rigid, was designed to reduce the risk of injury in an impact. Meanwhile, the height of the bonnet is raised in order to accommodate a crumple zone between the structure and the uppermost parts of the engine. Thanks to a score of 24 points out of 36, Renault ZOE has emerged as the best car in its class in terms of pedestrian protection, too.

Safety in its genes… plus equipment

Renault ZOE is equipped with cruise control and a speed limiter as standard, as well as audible and visual seat belt reminder warnings for all seats, plus ESC. It was awarded the maximum score of eight points for this part of the evaluation process, again despite the increased severity of the criteria employed.

Renault’s approach to safety is founded on a detailed study of actual accidents and real world safety with a view to proposing products that correspond with the realities on the road, including the incorporation of safety equipment as standard from the very first equipment level. The priorities consequently focus on the development of the most efficient technologies to a) prevent an accident happening in the first place, b) ensure that corrective action can be taken in unexpected situations and c) protect passengers when an impact does occur. Renault’s holistic approach does not boil down to just one equipment feature or technology. Over the years, Renault has emerged as a benchmark for automotive safety and this is also mirrored in the results its models have secured in media ratings.

When it comes to active safety, the qualities of the chassis, combined with auto-adaptive digitalisation of the vehicle’s dynamics, permit emergency situations to be detected with precision. The ABS and ESC functions, which are both standard, are even more efficient and are triggered at just the right moment to prevent jarring. The emergency brake assist function is incorporated in an electronic control unit/hydraulic unit.

Last but by no means least, work on ergonomics means that drivers are able to concentrate on the road ahead. For greater comfort, the legibility of instruments has been designed to be particularly clear and graphical. Renault ZOE also benefits from modern driving aids such as advanced navigation, voice commands for certain functions with the R-Link multimedia system, the automation of tasks such as headlight and windscreen wiper activation, plus rear parking sensors and even a reversing camera for certain versions. All versions of Renault ZOE are equipped with Bluetooth® telephony.