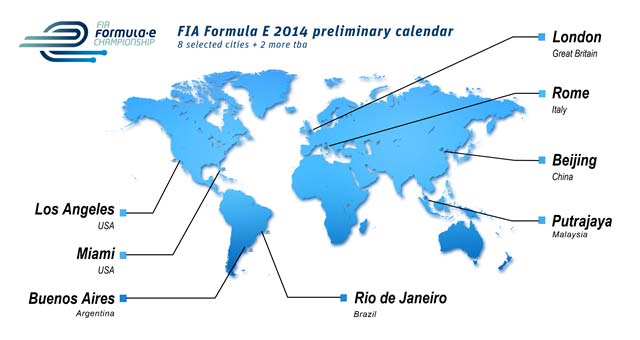 Cities on the 2014 Formula E Championship calendar include London and Rome in Europe; Los Angeles and Miami in the United States; Beijing China; Putrajaya, Malaysia; and Buenos Aires and Rio de Janeiro in South America.

Formula E Holdings, the promoter of the FIA Formula E Championship, said two more races would be announced at a later date.

The Formula E concept was unveiled in August 2012. Promoters say they have received inquiries from 23 major cities.

The final calendar will be presented to FIA for its approval at the September 2013 World Motor Sport Council.

“Zero emission world class motor racing is a scintillating concept,” said Mayor of London, Boris Johnson, “and I am hugely keen that London be involved in the birth of Formula E. It has the potential to highlight the impressive strides being made in the manufacture of electric vehicles and hosting a street race could also be of considerable economic benefit to our city.”

“We are enthusiastic about the future organization and promotion of Formula E,” added The Mayor of Miami, Tomas Regalado, “the worldwide championship for electric single-seater cars, sponsored by the FIA.”

“We are thankful to all the cities that have expressed their willingness to host our races,” said Alejandro Agag, CEO of Formula E Holdings. “The fact that cities from all over the world are interested in the FIA Formula E Championship is extremely heartening and shows a global commitment to clean mobility and sustainability. The provisional calendar we publish today is composed of cities in America, Europe and Asia. We look forward to also racing in Africa and Australasia from 2015 onwards.”