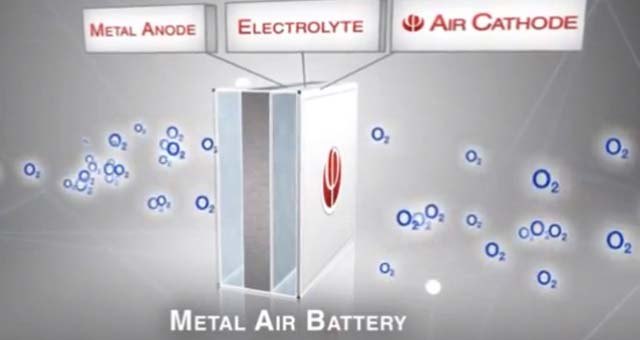 Phinergy, an Israeli developer of metal-air energy systems, has demonstrated a new type of aluminum-air battery that is capable of providing enough energy to power an electric vehicle for up to 1000 miles at a time—with occasional stops to take on more water.

Phinergy claims they have developed new technology that prevents carbon dioxide from entering the system, which in the past, has led to breakdowns of the materials used in such batteries.

Metal-air batteries get their energy via interaction between oxygen and metals. In this new battery system, the aluminum serves as the anode and the oxygen in the air as a cathode. The system is made up of aluminum plates that give up their energy and must eventually be replaced (via recycling, the company says). Water is used as an electrolyte, and thus it too must be replenished on a regular basis.

The company claims that each plate holds enough energy to carry an EV for approximately 20 miles and that their system currently holds 50 of the plates at one time, which together add up to a charge capacity of 1000 miles (the system needs a water fill-up every 200 miles). Once the plates are depleted they must be replaced.

The idea of using metal-air batteries isn’t new, researchers have been studying the possibilities for several years and some have even suggested aluminum-air batteries are the wave of the future. What’s been holding them up is the problem of carbon dioxide in the air causing corrosion damage—that’s what’s new with this system.

Phinergy says they have found a way to prevent the gas from entering the system and in so doing have created a battery that can last as long as the car it powers. The entire approach is novel in the respect that a metal is used almost as a fuel source, rather than as a battery component. When it runs out, more fresh metal is needed, and it being metal, it’s rather heavy—one pack of 50 plates weighs roughly 55 pounds.

For that reason, Phinergy is promoting the aluminum-air battery as a trip extender, rather than as a means of powering commuter trips. It could be used either in vehicles that typically make long journeys or as an added feature for traditional EVs (which typically have a 100 mile range at best).

Phinergy believe cars using their aluminum-air batteries will be sold commercially as early as 2017.