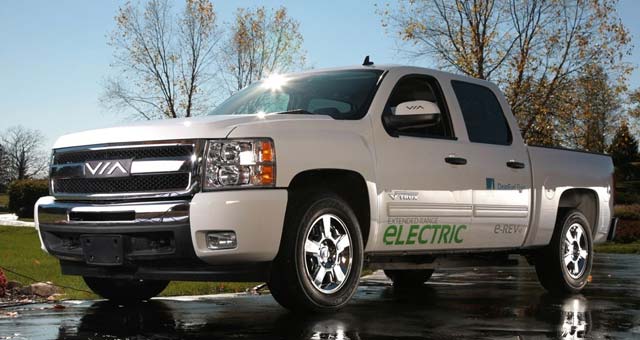 Via Motors has announced it will unveil three new full-size, extended-range electric vehicles (eREV) at the 2013 Detroit Auto Show next month.

The ground-breaking extended-range electric vehicles to be unveiled include a high-performance 4WD pick-up truck with an 800 horse-power option called the “X-Truck,” a technology-packed, luxury class 4WD SUV, and the first-ever extended range electric 12-passenger van, for ride-share and shuttle applications.

Earlier this year, VIA Motors introduced the world’s first extended range electric (eREV) pick-up truck, and cargo van that will begin production in 2013 for fleet sales.

“These three new offerings demonstrate VIA’s commitment to electrify the top-selling vehicles that use the most gas and can therefore benefit the most from converting to low-cost electric fuel, while at the same time, reducing more emissions to benefit the communities they serve,” said VIA’s president Alan Perriton.

VIA works with OEM partners to build electric versions of popular vehicles using VIA’s technology, enabling full-size trucks, vans & SUVs to drive like the top selling Chevrolet Volt, allowing them to perform the same duty as a conventional vehicle, while capturing huge operational savings that can pay for the vehicle over time.