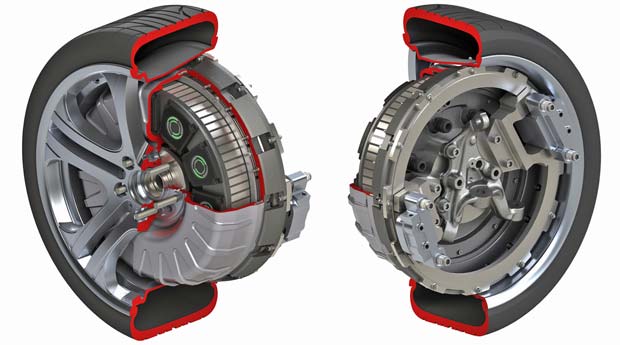 Protean Electric’s advanced in-wheel electric drive has been named one of the 10 Most Promising Technologies for 2013 by Car and Driver magazine.

Being named to this list is evidence that Protean Electric’s in-wheel electric drive has a bright future in the global auto industry, according to Car and Driver, the world’s largest auto enthusiast magazine.  This list of Most Promising Technologies accompanies Car and Driver’s 10Best Cars celebration, which has existed for more than three decades.

Car and Driver’s technical director, Don Sherman, author of the Most Promising Technology feature, is a strong believer in the potential of in-wheel and wheel-hub motors for coming electric and hybrid-electric automobiles.

“Integrating the propulsion system with the wheel hubs will enable designers and engineers to achieve major gains in packaging efficiency, fuel economy and, potentially, performance,” he noted. “We expect Protean Electric, the leader in this field, to help manufacturers implement this technology.”

“To be named a leader and one of the Most Promising Technologies by Car and Driver is an immense honor. This recognition indicates that the industry is no longer thinking of ‘if’ but ‘when’ in-wheel motors will be commonly used across a wide range of vehicles. And we believe that when is now,” said Protean Electric Chairman and CEO Bob Purcell.

Protean offers a unique value proposition to the auto industry and its customers, Purcell added.

• Fuel economy improvements up to 30 percent depending on battery size
• Highest torque density of any of today’s leading electric propulsion systems
• 81 kW (110 hp) and 800 Nm (590 lb.-ft. torque) in each motor
• Weight of only 31 kg (68 lbs.) per motor
• Fits within the space of a conventional 18-inch road wheel
• Superior regenerative braking capabilities, which allow up to 85 percent of the available kinetic energy to be recovered during braking

Protean has been awarded 25 patents for its unique technology and design, and 84 additional patent applications have been filed internationally and with specific countries in North America, Europe and Asia. Protean also has won the prestigious 2012 Technology Pioneers Award from the World Economic Forum as being one of most promising start-up technology companies in the world.

Suzuki ACROSS PHEV launched in the UK

Largest ever MG shipment arrives in the UK – and two-thirds are EVs!