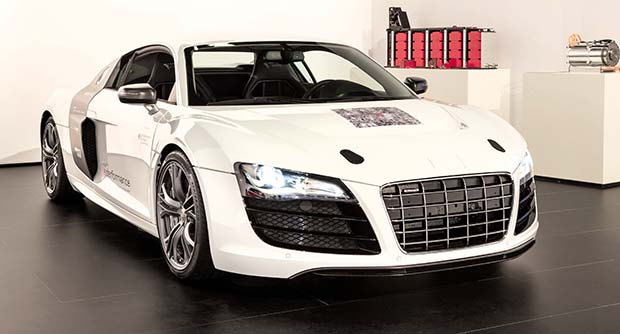 Audi, in partnership with Bosch and several institutes at the RWTH Aachen University, has completed the three year e-performance research project to develop a technology platform for electric mobility.

Experts from both industry and academia were involved in the project, which had a budget of €36 million. The German Federal Ministry for Education and Research (BMBF) supported e-performance with some €23 million.

e-performance was broken down into a dozen work packages from the energy storage system to the control concept to dynamic stability control. In the initial phases, the participants worked mostly with advanced simulation tools, then they built submodules and finally a drivable car, the F12. The sports car looks like a production Audi R8 on the outside, but it is purely electric-powered. The F12 represents the “e Sport” model within the modular system platform.

One of the key subject areas of the project was the high-voltage battery. In the F12, it comprises two separate blocks with an overall capacity of more than 38 kWh. Each block is made up of 200 macrocells. The beveled walls allow the macrocells to shift relative to one another for additional safety in the event of an accident. Cast aluminum sections in the battery system absorb a majority of the crash energy. Computations and initial tests on the component level indicate that this innovative safety concept can even withstand a side impact with pole.

The research car is powered by three different electric motors, each of which can be controlled separately. During slow driving, only the synchronous motor at the front axle is active. At higher speeds, the-performance-optimized asynchronous motors at the rear axle come into play. Together the three electric motors produce 150 kW (204 hp) and 550 Nm (405.66 lb-ft) of torque. Their interaction makes the e Sport a fully electric quattro.

Another of the technology platform’s innovations is the switchable high-voltage electrical system. The two batteries deliver different output voltages of 144 or 216 volts. The uniform system voltage required is provided by means of a DC/DC converter. Under part load, the voltage is around 200 volts to maximize efficiency. With increasing power demand and speed, this increases to as much as 440 volts.

The F12 also uses an efficient heat pump for the thermal management of the drive system and the interior. It regulates the temperature of the batteries depending on the situation and can also store heat in them so that less energy is required to heat the interior the next time the car is driven.

The F12 driver controls basic drive functions – Park, Reverse, Neutral and Drive – by operating buttons on the center tunnel. All other operations are controlled via a tablet computer that can be removed from the center console. A user-programmable instrument cluster presents all key information in high resolution.

Thanks to modern development tools and innovative knowledge management, the project partners were able to network very flexibly. The researchers used cameras to document each design step and made their knowledge available on a server accessible to all collaboration partners throughout Germany. This transparency and tight networking made e-performance into a research project with a profound halo effect for Germany as a base of research and industry. The partnerships did not end with the completion of the F12. The first follow-up projects focusing on specific technical topics such as thermal management have already begun. Individual solutions, such as the CFRP housing for the rear battery, show good prospects for later production use. The German Federal Ministry of Education and Research wants to continue to support the development of new automobile concepts, primarily in the areas of the battery, high-performance electronics systems and overall energy management.[wzslider height=”400″ lightbox=”true”]