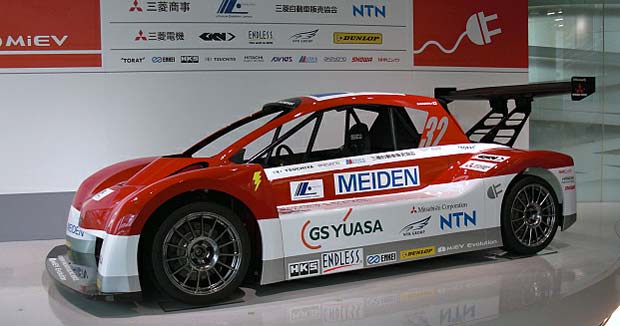 Mitsubishi will be aiming for victory in the Electric Class with the i-MiEV Evolution, a specially-prepared competition version based on the ‘i’ electric car.

Mitsubishi will also be bringing production ‘i’ electric car that has been updated with a more aerodynamic front bumper and new safety equipment.

The i-MiEV Evolution has been developed in cooperation with several partner companies including Meidensha Corporation and GS Yuasa Corporation.

Driving the i-MiEV Evolution in the Pikes Peak event and also serving as team manager will be Mr. Hiroshi Masuoka – the first Japanese driver to post consecutive overall victories in the Dakar Rally. The Mitsubishi i will be piloted by Ms. Beccy Gordon, a winner in the Score International Off-Road Racing Series.

i-MiEV Evolution
Developed for the Pikes Peak event, the i-MiEV Evolution basically uses the same motor, drive battery and other major components as the production i-MiEV fitted to a specially-designed racing-specific body which uses a tube-frame chassis and a carbon fibre cowl among other features designed to reduce weight and improve aerodynamic performance.

Mitsubishi ‘i‘
For the Pikes Peak event the production Mitsubishi ‘i’ has been modified using a more aerodynamic front bumper and fitted with roll bars and other safety equipment.