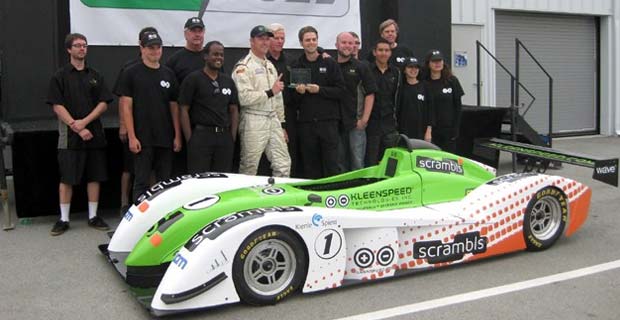 This month KleenSpeed’s EV-X11 electric race car has set a track record for an electric vehicle at California’s Sonoma raceway.

“It’s pretty good. The same cars we run with a gas engine, 1 liter gas engines, motorcycle engines, they are about 400 pounds lighter than this one so we’re at a disadvantage with the weight, but we’re only about 3 to 4 seconds slower on your average comparable car to this,” said Kevin Mitz, who was behind the wheel of the car.

Like Formula One teams, KleenSpeed is using the racing car as a test bed for technology it hopes will be useful in more mainstream vehicles.

“Once you develop a race car system, you can migrate those into the passenger cars,” said KleenSpeed’s CEO Timothy Collins. “We actually have a passenger car coming out in October, not for sale, it’s a test vehicle with a 150-mile battery pack in it and a completely new system. It incorporates all of the technology we have developed to date.”

The KleenSpeed EV-X11 electric race car is aided by aerodynamic down force, and powered by a UQM PowerPhase Select 145 electric motor and controller system.