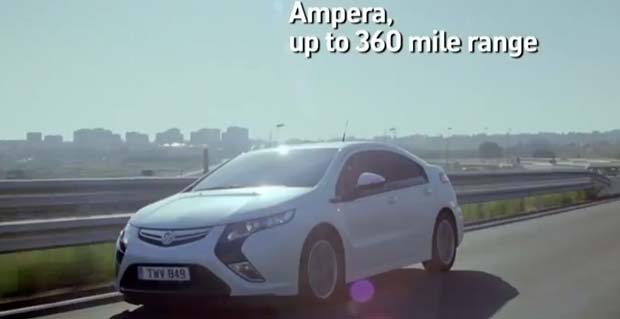 A TV commercial for Vauxhall Ampera has been banned by the UK Advertising Standards Authority for misleading consumers.

The advert claimed the Vauxhall Ampera had a range of up to 360 miles, without making it clear that it would use a gasoline engine to do so.

The ad’s voiceover claimed that the new Vauxhall Ampera was ‘driving electricity further’ but on screen text only stated that the car used an ‘additional source’ to generate electricity, to enable it to keep driving beyond the typical 50 mile range achieved through the car’s battery power alone.

General Motors, parent company of Vauxhall, claimed its advertising material made it clear that the car would drive 50 miles on a fully charged battery before the Ampera’s “range extender” mode takes over for the remainder of the 360 miles.

Vauxhall strongly defended the allegations, saying that as the petrol engine doesn’t control the wheels, the claim for electrically driving for 360 miles should stand.

But the Advertising Standards Agency said that having reviewed the footage, it believed most viewers would not understand that the car was in some circumstances powered by electricity generated with a petrol engine.

“We considered that throughout the ad the emphasis was on the fact that the car was being driven electrically, and that most viewers would not understand that the car was in some circumstances being powered by electricity generated with a petrol engine. The ad promoted an innovative product which many viewers would not immediately understand and we therefore considered that it would need to explicitly state that the car had a petrol engine. Because it did not clearly explain how the vehicle worked in extended-range mode, we concluded that the ad was misleading.”