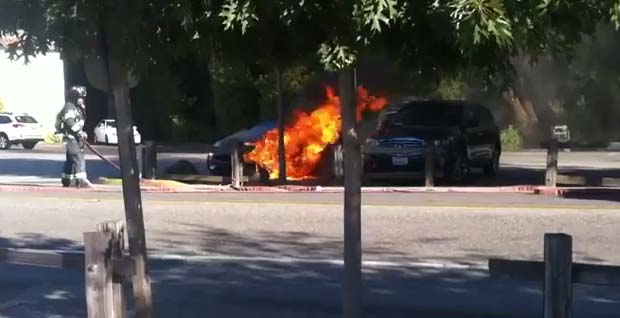 Fisker Automotive engineers have started to examine and test a Karma plug-in hybrid that burst into flames in a parking lot in Woodside, California, on Friday.

In a statement Monday, Fisker said its investigators from Pacific Rim Investigative Services Group don’t believe the latest fire was caused by the Karma’s lithium-ion battery.

Fisker said that the fire started outside the engine compartment and said there was no damage to the passenger area and that there were no injuries.

“Continued investigative efforts will be primarily focused within the specific area of origin, located forward of the driver’s side front tire,” Fisker said. Further details will be announced after a full report is completed.”

The reliability of the Karma has been called into question after Fisker recalled 239 Karma cars in December to fix a battery defect that raised the risk of a fire. The Karma’s battery pack has been closely scrutinized after a battery failed while the car was being tested by Consumer Reports magazine in March. Then, in May, a Karma was destroyed in a garage fire in Sugar Land, Texas. The car was not plugged in, Fisker says. The cause of the fire has not been determined.