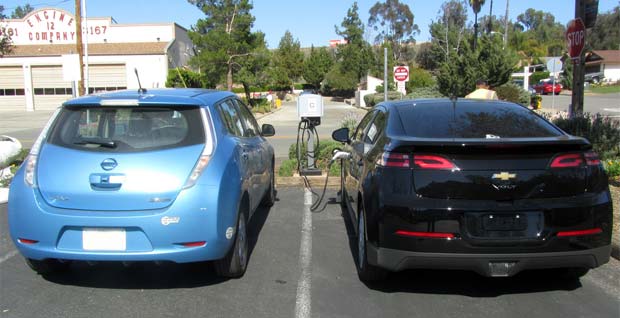 These early adopters were thrilled to finally own a plug-in electric vehicle (PEV) and utilize the technology’s ability to displace petroleum, lower or eliminate tailpipe emissions, and provide brisk, quiet acceleration.

Many in the auto industry were equally enthusiastic about the re-emergence of PEVs, which had been absent from the marketplace for nearly 100 years (except for a brief period in California in the late 1990s/early 2000s).

Assembly lines in Japan and the United States produced more than 20,000 PEVs in 2011, an all-time record for such vehicles. Yet, optimism was gradually replaced with a better understanding of the practical challenges of launching new models and expanding PEV sales to mainstream consumers unfamiliar with the technology – especially coming off a global economic recession.

Still, the PEV market was indeed launched. Throughout 2011, a growing number of consumers started to learn to recognize the key distinctions between hybrid electric vehicles (HEVs) and PEVs, which include both PHEVs and BEVs:

–  HEVs are mostly powered by gasoline, with  assistance from an electric motor. They have been in the marketplace for more than 15 years, and more than 4 million units have been sold globally – now on pace to grow by more than 1 million a year.

–  PHEVs offer increased electric driving range over HEVs, using some energy from the electric grid. But PHEVs command higher prices due to greater complexity and the use of larger, more expensive battery packs.

– BEVs use still larger battery packs, but do not require petroleum fuel because they plug into the grid for all their energy. Driving range between charges is usually less than 100 miles.

HEVs versus PEVs
Many of the people interviewed for this report look to the pattern of HEV sales during the past 15 years for guidance as to how long it will take for PEV sales to grow. Global sales of HEVs will reach 1,060,427 units in 2012 – 15 years after the first Toyota Prius went on sale in Japan. 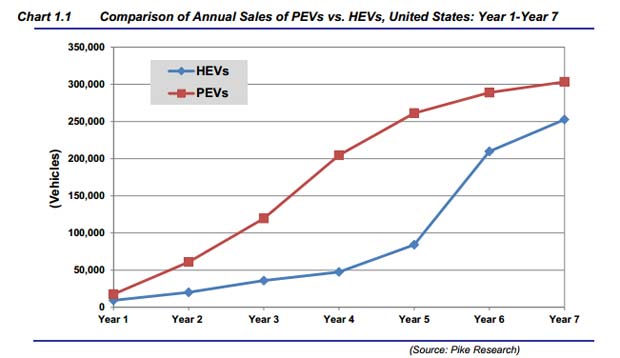 PEV Sales: 2012-2020
The actual sales data for 2010, 2011, and the first 5 months of 2012 indicate relative sales volumes above HEV sales during their equivalent initial launch years. Given the schedule 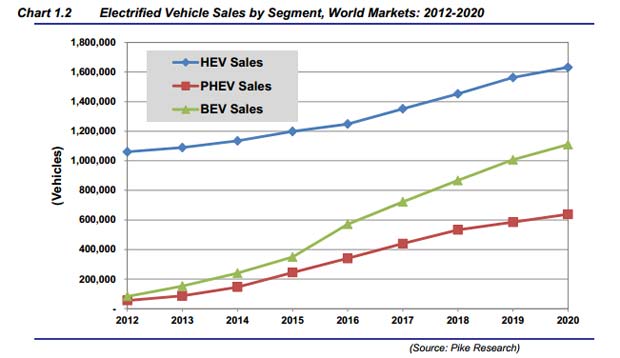 The preference of U.S. consumers for PHEVs over BEVs is expected to continue throughout the forecast period. Car companies will continue to produce PHEVs, as they anticipate that U.S. consumers will continue to want slightly larger vehicles with longer range and the ability to extend the electric range using a gas engine. However, all PEVs will face increasing competition from more affordable high mpg internal combustion engine (ICE) cars, as well as HEVs.

In contrast, the Japanese market is expected to see 32,226 sales of BEVs compared to just 2,840 PHEV sales in 2012. A preference for BEVs over PHEVs will be the pattern for the Asia Pacific region, where consumers will be amenable to the smaller BEVs that North Americans are more reluctant to purchase.

Western Europe will fall somewhere in between, showing  roughly equal sales numbers for both PHEVs and BEVs.  In the mid-term, the three global regions, North America, Asia Pacific, and Western Europe, will each represent roughly one-third of the PEV market. As China’s PEV market begins to grow in 2013 and expands throughout the decade, Asia Pacific will become the world’s largest market for PEVs. 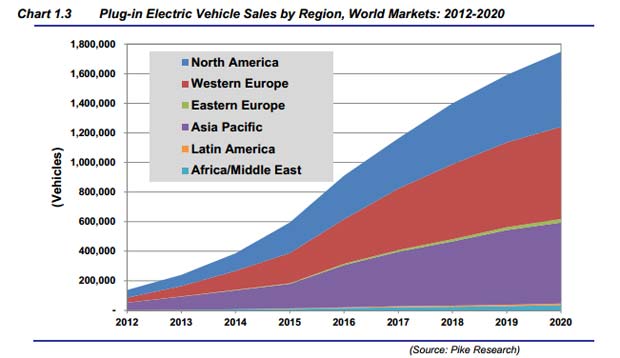 The Future of the PEV Market
The PEV market will develop and grow, but not at the scale or pace previously anticipated by key proponents of the technology. The frequently quoted goal of reaching 1 million PEVs on the road in the United States by 2015 will not be met. Instead, the 1 million mark will be reached in early 2018. Many of the OEMs, suppliers, charging equipment and service providers, and other stakeholders interviewed for this report remain hopeful about reaching the 1 million goal soon after 2015, expecting one kind of market breakthrough or another.

Those betting on strong early growth curves hoped that battery prices would quickly fall, positive word of mouth would quickly spread, or automakers would introduce new models more quickly.  There is little evidence that any one of such breakthroughs will happen to any significant degree in the next 5 or 6 years. In fact, the lion’s share of OEMs making PEVs are doing so at a very measured pace, vetting technology and consumer preferences.

In the meantime, they are tracking to government mandates rather than producing based on expectations of creating an overnight sensation. Startup PEV companies, many venture-backed, will face a difficult time meeting announced production numbers. That has been the case for the past few years, a time when several prominent startups have gone out of business or fallen in and out of bankruptcy.

While Pike Research does not foresee a major single tipping point, a series of slight market improvements is anticipated – one adding to another, combining to gently push bigger production and sales numbers. Slightly lower battery costs will mean slightly lower purchase prices, spurring increased production of cars with slightly more range and easier charging. Positive word of mouth will slowly spread. Of course, a big wild card is gas prices, which are expected (but cannot be guaranteed) to rise.

The first-mover advantage owned by Nissan and General Motors (GM) will fade away in the next couple of years. For the third straight year, Pike Research’s survey of consumer preferences indicates that Toyota, Ford and Honda are the brands that resonate most as providers of electric vehicles (EVs). These three companies have demonstrated among the strongest track records for building and selling HEVs. Their announcements for future PEV products, especially plug-in hybrids, align with what consumers want, based on segment as well as price. On the other hand, it is not clear how announced product plans from Nissan and GM will help them capitalize on aggressive early positions. As a result, Toyota will bypass Nissan and GM in North American PEV sales by 2013, and Ford will become the top seller as early as 2014. Ford will likely hold this position for the rest of the decade.

While the PEV market will develop slower than many in the industry hope, it will nevertheless reach annual sales of 594,130 by 2015 and 1,748,268 by 2020. At the end of the decade, HEVs will see 1.6 million annual sales. Total sales of battery-powered vehicles will thus reach around 3.4 million out of the 103 million global light duty vehicle sales expected in 2020.