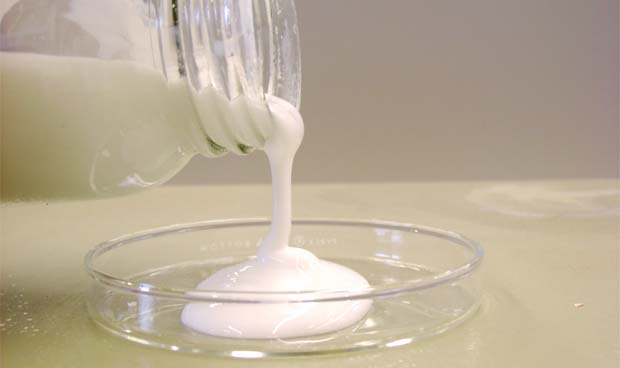 Batteries provide the “fuel” that drives electric cars – in effect, the vehicles’ lifeblood. If batteries are to have a long service life, overheating must be avoided.

A battery’s “comfort zone” lies between 20°C and 35°C (68°F and 95°C). But even a Sunday drive in the midday heat of summer can push a battery’s temperature well beyond that range. The damage caused can be serious: operating a battery at a temperature of 45°C instead of 35°C halves its service life. And batteries are expensive – a new one can cost as much as half the price of the entire vehicle. That is why it is so important to keep them cool.

Scientists from the Fraunhofer Institute for Environmental, Safety and Energy Technology (UMSICHT) in Germany have developed a new battery coolant known as CryoSolplus, which is three times more effectively than water, keeping the battery temperature within an acceptable range even in extreme driving situations.

It is a dispersion that mixes water and paraffin along with stabilizing tensides and a dash of the anti-freeze agent glycol. The advantage is that CryoSolplus can absorb three times as much heat as water, and functions better as a buffer in extreme situations such as trips on the freeway at the height of summer. This means that the holding tank for the coolant can be much smaller than those of watercooling systems – saving both weight and space under the hood.

In addition, CryoSolplus is good at conducting away heat, moving it very quickly from the battery cells into the coolant. With additional costs of just 50 to 100 euros, the new cooling system is only marginally more expensive than water cooling.

As CryoSolplus absorbs heat, the solid paraffin droplets within it melt, storing the heat in the process. When the solution cools, the droplets revert to their solid form. Scientists call such substances phase change materials or PCMs.

“The main problem we had to overcome during development was to make the dispersion stable,” explains Dipl.-Ing. Tobias Kappels, a scientist at UMSICHT.

The individual solid droplets of paraffin had to be prevented from agglomerating or – as they are lighter than water – collecting on the surface of the dispersion. They need to be evenly distributed throughout the water. Tensides serve to stabilize the dispersion, depositing themselves on the paraffin droplets and forming a type of protective coating.

“To find out which tensides are best suited to this purpose, we examined the dispersion in three different stress situations: How long can it be stored without deteriorating? How well does it withstand mechanical stresses such as being pumped through pipes? And how stable is it when exposed to thermal stresses, for instance when the paraffin particles freeze and then thaw again?” says Kappels. Other properties of the dispersion that the researchers are optimizing include its heat capacity, its ability to transfer heat and its flow capability.

The scientists’ next task will be to carry out field tests, trying out the coolant in an experimental vehicle.