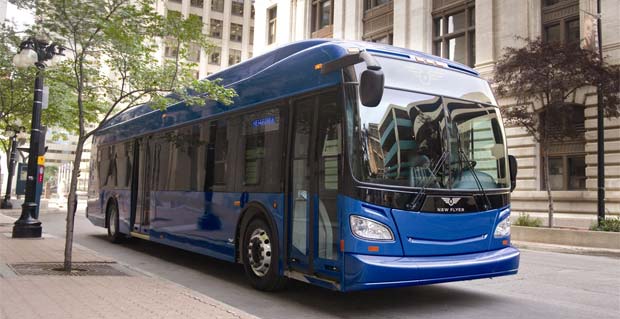 An all-electric, battery-powered prototype demonstration bus under joint development by Mitsubishi Heavy Industries, Ltd. (MHI), the government of Manitoba, local companies and a Canadian college has been completed and was unveiled in Manitoba, Canada.

The 40-foot “E-Bus” is powered by a 120 kWh lithium-ion rechargeable battery packs developed by MHI that offer significant power retention capability. Going forward, the bus will be demonstrated on the streets of Winnipeg over the next two years.

The E-Bus project is being implemented under the Memorandum of Understanding (MOU) on Renewable Energy Development signed in December 2010 between the Government of Manitoba and MHI, under which the two parties agreed to collaborate towards realizing an advanced low-carbon society.

As the first step of the initiative, the Government of Manitoba, MHI, Manitoba Hydro, Red River College and New Flyer Industries Canada ULC, a Canadian manufacturer of heavy-duty transit buses, have been working since April 2011 to develop and demonstrate a lithium-ion rechargeable battery-powered bus and recharging technology.

Going forward the project will test the E-Bus’s compatibility in cold weather through actual operation. Also, it will contribute to the study of promoting electrification of transportation using electric powertrains such as lithium-ion rechargeable batteries, and establishment of recharging infrastructure, aiming to respond to the need for environmental burden reduction in the transportation field. MHI views this project as a very important step for popularizing lithium-ion rechargeable batteries in the North American electric bus market, a market which the company expects to grow.

MHI considers energy and environment-related business to be one of its areas of focus for the 21st century, and the company has been participating in many environment-related projects of governments and municipalities both in Japan and abroad. Going forward MHI will continue to aggressively propose innovative solutions for energy and environmental issues worldwide, leveraging its expansive range of technologies and knowhow in these fields.