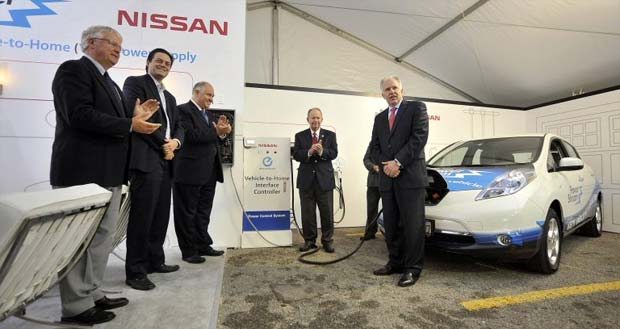 PowerStream and Nissan Canada at the Georgian College Auto Show demonstrated, for the first time in Canada, a system where a fully or partially charged battery in an electric vehicle (EV) can provide power to a home.

Developed by the Nissan Motor Company, the ‘vehicle-to-home” (V2H) technology can help Nissan LEAF owners in Canada to better manage their electricity costs through load shifting as well as provide a back up power source for their homes for up to four hours during an outage.

The demonstration involved the use of a Nissan LEAF plugged into a power control system (PCS) that enables the car’s battery to power lights, appliances and other devices in the home. An automatic transfer switch (ATS) allows for the home’s electricity supply source to be switched from the power grid to the battery in the EV through the PCS.

PowerStream and Nissan believe this system will allow households to be supplied with a stable amount of electricity throughout the day and reduce any potential burdens on the current power supply by charging and storing electricity in Nissan LEAF with electricity generated at night or through sustainable methods such as solar power, and using it during high demand periods.

The output from the Nissan LEAF can provide enough power to operate high electricity-consuming appliances in the home, such as an air conditioner, stove, refrigerator, washing machine and dryer, at the same time for approximately a full day.

PowerStream added the Nissan LEAFs to its fleet for use in conjunction with the company’s electric vehicle smart charging station pilot program. By using the Nissan LEAF with smart charging technology, PowerStream has been identifying the most cost effective means to control the electrical loading of its distribution system assets resulting from the increased use of electric vehicles.