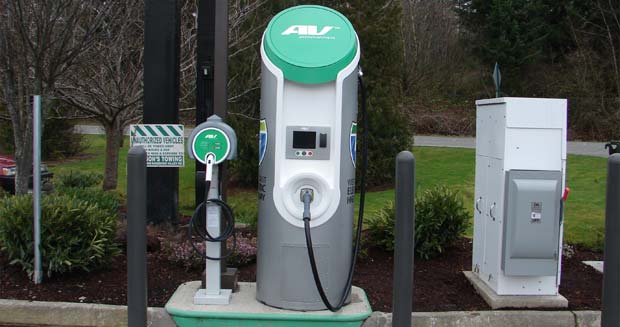 The border-to-border vision of the West Coast Electric Highway moves closer to becoming a reality today with the opening of new EV charging sites, extending the highway to the Canadian border and opening it to electric vehicle drivers from both countries.

Today, the Washington State Department of Transportation (WSDOT), along with electric charging station partner AeroVironment opened ten new public charging stations—seven along Interstate 5 and three along U.S. Route 2 in northern Washington – that provide EV drivers the ability to travel emission-free from Seattle to the Canadian border.

Eight of the 10 new charging stations in Washington feature AeroVironment’s state of the art “DC fast chargers,” which deliver a full charge for a nearly-depleted EV battery in less than 30 minutes. All locations include AeroVironment Level 2 chargers, which provide EV drivers with convenient charging while they grab a bite to eat, run errands or visit with friends. The locations are strategically placed near desirable shopping and entertainment venues for drivers, which will benefit drivers and businesses alike.

Two of the 10 locations – at rest areas near Blaine and Vancouver – offer only Level 2 chargers. There, electricity is provided free to drivers by Adopt a Charger and the Seattle Electric Vehicle Association.

“Partnering with visionaries like Washington State allows us to provide EV drivers with charging solutions wherever they are—and to travel greater distances in their electric vehicles. Together, we’re growing the EV infrastructure to realize a clean transportation and energy independent future.”

The West Coast Electric Highway is a vision for a transportation corridor from the Canadian to Mexican borders, connecting California, Oregon and Washington along I-5 that fully supports electric vehicles. Inaugurated in Southern Oregon on March 16, 2012, the West Coast Electric Highway’s expansion in Washington creates international opportunities, opening the gateway to Canada.

The AeroVironment charging stations are available at convenient locations in Blaine, Bellingham, Burlington, Tumwater, Centralia, Ridgefield and Vancouver along Interstate 5 and in Sultan, Skykomish and Leavenworth along U.S. Route 2. Two additional stations will be installed in the coming weeks.

The U. S. Department of Energy provided seed funding of $1.5 million through the American Recovery and Reinvestment Act to expand the West Coast Electric Highway in Washington. The funding is administered by the Department of Commerce through the State Energy Program.