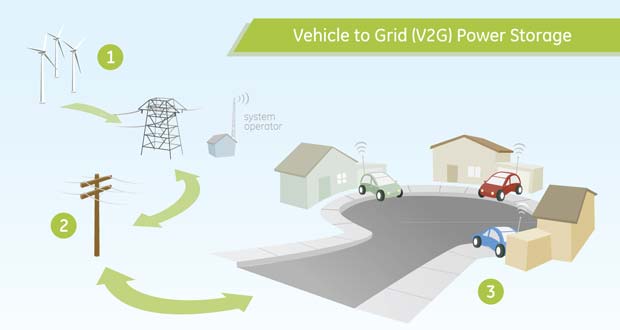 Although the vehicle-to-grid (V2G) concept of sharing power to the grid from plug-in electric vehicles has been in existence for nearly two decades, the underlying technologies are only just now emerging from the pilot project phase.

Beginning in the next half-decade, however, plug-in electric vehicles with V2G technology will play an important role in the ancillary services market, helping to address regional power grids’ continual need for stabilization to match supply demand.

According to a recent report from Pike Research, these vehicles will compete with traditional generation sources as well as with emerging technologies, such as stationary battery storage, for revenue from ancillary services such as frequency regulation and demand response.

By 2017, according to the cleantech market intelligence firm, approximately 90,000 light-duty vehicles and an additional 1,500 medium/heavy duty trucks will be enabled with V2G technologies, generating revenue of more than $18 million.

The most likely early adopters of V2G will be fleets of light-duty vehicles and medium- and heavy-duty trucks. Fleets often have a more consistent availability for connection to the grid than vehicles owned by individual consumers. Trucks, with their larger battery packs and potential to deliver power more quickly to the grid, can generate much greater revenue per vehicle than light-duty vehicles. The Asia-Pacific region will be the largest market, followed by Western Europe and North America. North America will trail both Europe and Asia in incorporating plug-in electric vehicles into grid services because of the lower penetration of renewables and a regulatory framework that is less encouraging of V2G.

“V2G vehicles have an advantage over competing centralized generation assets because they can stabilize the grid at the endpoints closer to demand,” says research director John Gartner. “In order to produce sufficient power capacity to interest grid operators, though, dozens of plug-in electric vehicles must be aggregated in a given area. Thus V2G investment will be strongly influenced by the growth in plug-in electric vehicle sales, and substantial investment in infrastructure and vehicle-based technology will be necessary to enable V2G services on a large scale.”