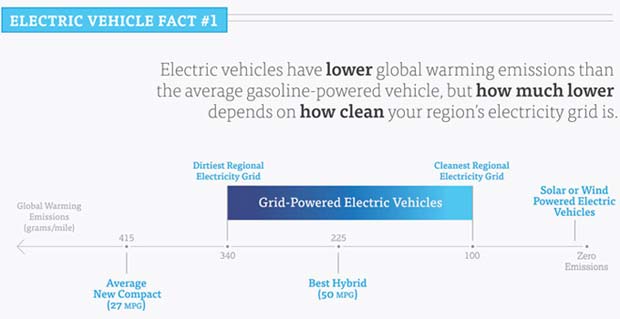 Electric vehicles in the U.S. save money on fuel and are less polluting than gasoline-powered vehicles, even in places where electricity is made by burning coal.

Electric vehicles burn no gasoline and have no tailpipe emissions, but producing the electricity used to charge them does generate global warming emissions.

The amount of these emissions, however, varies significantly based on the mix of energy sources used to power a region’s electricity grid, according to a new report released on Monday by the Union of Concerned Scientists (UCS).

The study has found that hybrid cars with very high gas mileage are less polluting than electric vehicles charged up in coal-heavy regions. Electric vehicles are no better than a standard gasoline-powered subcompact in the Midwest, but they are much less polluting even from the best hybrids in Southern California.

The UCS report, State of Charge: Electric Vehicles’ Global Warming Emissions and Fuel-Cost Savings Across the United States, compares the global warming emissions from EVs with those from gasoline-powered vehicles and finds that:

– Nationwide, EVs charged from the electricity grid produce lower global warming emissions than the average compact gasoline-powered vehicle (with a fuel economy of 27 miles per gallon)—even when the electricity is produced primarily from coal in regions with the “dirtiest” electricity grids.

– In regions with the “cleanest” electricity grids, EVs produce lower global warming emissions than even the most fuel-efficient hybrids.

Charging Up: How Clean is Your Electricity Grid?
The report evaluates regional electricity grids across the United States based on the global warming emissions produced from electricity generation, and then compares the emissions generated by charging an EV with those produced by gasoline-powered vehicles.

The report finds that:

– Nearly half of Americans (45%) live in the “best” regions where EVs produce lower global warming emissions than even the most fuel-efficient gasoline hybrids on the market today (greater than 50 mpg).

–  A minority (18%) reside in “good” regions where emissions from EVs are comparable to the most fuel-efficient non-hybrid gasoline vehicles (31 – 40 mpg).

Go Electric. Save Oil. Save Money on Fuel Costs.
Driving on electricity is cheaper than driving on gasoline. Driving an EV slashes oil consumption and saves thousands of dollars in fuel costs over the lifetime of the vehicle.

For example, an EV driver could save nearly $13,000 on fuel costs and use 6,100 fewer gallons of gasoline over the life of the vehicle relative to today’s average compact gasoline car.

Local utility rates determine just how much EV drivers will save. Taking advantage of different rate plans utilities have to offer can help maximize savings.

The report compares charging costs in 50 major cities across the United States and finds that:

– On the best rate plans, electric vehicles can save $750 – $1,200 a year on fueling costs compared to a gasoline vehicle averaging 27 miles per gallon and fueled at $3.50 per gallon.

– EV owners can save money on fueling costs without changing electricity plans, but taking advantage of rate plans that offer lower-cost electricity at night (“time-of-use” plans) can mean hundreds of dollars in additional savings per year, especially in California.[wzslider height=”400″ lightbox=”true”]