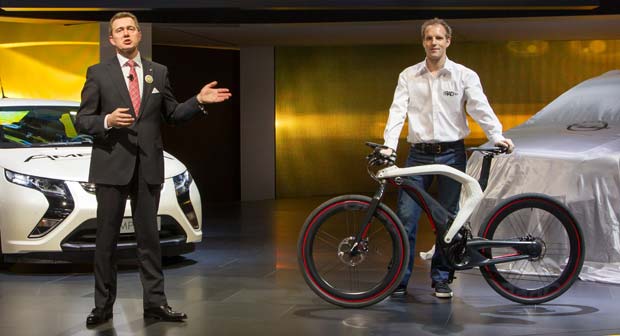 The RAD e bike is aimed primarily at urban people at a time when e-bikes are predicted to play an increasing role in future integrated urban transport concepts.

The RAD e name takes its inspiration from “Rad”- the German word for bicycle and wheel.q

It is the first e-bike concept to be designed around automotive manufacturing mass production methods. The RAD e’s pedelec propulsion system is based on a state-of-the art 250 watt electric motor and a lithium-ion battery. At an average speed of 20 kilometers an hour (12 mph) and depending on the electric assist and terrain, the e-bike achieves an electrically supported range of between 60 and 145 kilometers (37 to 90 miles).

In a maximum time of two-and-a-half hours, the battery can be fully charged. The e-bike can also be transported on Opel’s unique FlexFix bicycle carrier and be charged while driving.