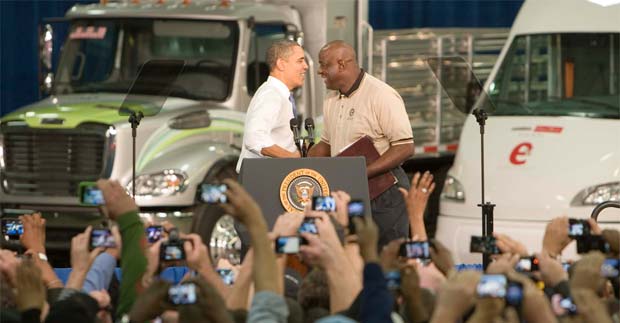 US President Barack Obama outlined new plans to support the sales and use of alternative-fuel vehicles — including cars and trucks that run on hydrogen and compressed — by introducing a tax credit similar to the one in place for plug-in electric vehicles.

Speaking at Daimler Trucks’s plant in Mt. Holly, N.C., Obama also announced a proposal to increase the current tax credit for the purchase of advanced vehicles running on alternative fuel from $7,500 to $10,000, while extending it to additional types of technology.

In the past, the credits have been linked to electric vehicles and hybrids, but a fact sheet put out by the White House indicated a move to support natural gas-powered vehicles as well.

Obama proposed a $1 billion “National Community Deployment Challenge” to help 10-15 communities “invest in the necessary infrastructure, remove the regulatory barriers, and create the local incentives to support deployment of advanced vehicles at critical mass.” Unlike a similar plan drawn up previously, the new $1-billion National Community Deployment Challenge to help selected communities invest in necessary infrastructure for alternative fuel vehicles will not be tied to electric vehicles, allowing, the White House said, “communities to determine if electrification, natural gas or other alternative fuels would be the best fit.” The president also proposed spending $3.7 billion on the tax credits.

The White House also said the president was launching something new “EV Everywhere” plan. EV Everywhere is intended to enable companies in the US to produce electric vehicles at lower cost, with an improved vehicle range and an increased fast-charging ability.