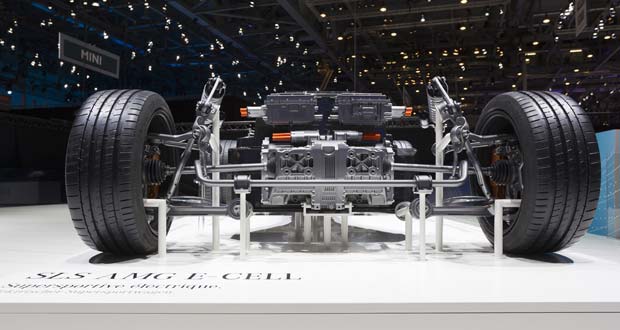 The drivetrain of the Mercedes SLS AMG E-CELL has been in development since 2010 as a result of the cooperation between Mercedes-AMG and Mercedes AMG High Performance Powertrains in Brixworth.

A small series-production run of the Mercedes-Benz SLS AMG E-CELL is expected to be launched onto the market in 2013.

The ground-breaking drive system of the technology vehicle boasts some outstanding features: powerful traction is provided by four synchronous electric motors with a combined peak output of 392 kW and a maximum torque of 880 Nm.

The four compact electric motors each achieve a maximum rotational speed of 12,000 rpm and are positioned close to the wheels. As a result, compared with wheel-hub motors, the unsprung masses are substantially reduced. One transmission per axle transmits the power.

Further exciting touches are provided courtesy of the agile accelerator response and the straight-line performance: unlike a combustion engine, torque build-up in an electric motor is instantaneous – maximum torque is available virtually from a standstill. The spontaneous torque build-up and confident power delivery – which does not suffer from any interruption of tractive power – are combined with engine running characteristics which are totally free of vibration.

According to the AMG developers, “torque vectoring” involves the individual control of the electric motors, something which enables completely new levels of freedom to be achieved. Torque vectoring is permanently active and allows for selective distribution of forces for each individual wheel. The intelligent distribution of drive torque greatly benefits driving dynamics, handling, driving safety and ride comfort. Each individual wheel can be electrically driven and electrically braked, depending on the driving conditions, thus helping to:

Torque vectoring enables optimum use of the adhesion potential between the tyres and the road surface in all driving conditions, thereby extending the critical limits of the vehicle’s driving dynamics.

Advanced technology from Formula 1: high-voltage lithium-ion battery
The SLS AMG E-CELL incorporates a liquid-cooled high-voltage lithium-ion battery featuring a modular design with an energy content of 48 kWh. Its development has made use of advanced technology from the world of Formula 1: the battery is the first result of the co-operation between Mercedes-AMG GmbH in Affalterbach and Mercedes AMG High Performance Powertrains (formerly Mercedes-Benz High Performance Engines). Headquartered in Brixworth, England, the company has been working closely with AMG for a number of years. F1 engine experts have benefited from its extensive expertise with the KERS hybrid concept, which made its debut in the 2009 Formula 1 season. At the Hungarian Grand Prix in 2009, Lewis Hamilton achieved the first historic victory for a Formula 1 vehicle featuring KERS hybrid technology in the form of the Mercedes-Benz KER System.[wzslider height=”400″ lightbox=”true”]The high-voltage battery consists of 12 modules each comprising 72 lithium-ion polymer cells. This optimized arrangement of a total of 864 cells has benefits not only in terms of best use of the installation space, but also in terms of performance. The maximum electric load potential of the high-voltage battery is 480 kW, which is an absolute best value in the automotive sector. Another technical feature of this considerable performance is the intelligent parallel circuit of the individual battery modules – this also helps to maximize the safety, reliability and service life of the battery. As in Formula 1, the 400-volt battery is charged by means of targeted recuperation during braking whilst the car is being driven.

High-performance control as well as effective cooling of all components
A high-performance electronic control system converts the direct current from the high-voltage battery into three-phase alternating current which is required for the synchronous motors and regulates the energy flow for all operating conditions. Two low-temperature cooling circuits ensure that the four electric motors and the power electronics are maintained at an even operating temperature.

The fiber composite materials have their roots in the world of Formula 1, among other areas. The advantages of carbon-fiber were exploited by the AMG engineers in the design of the monocoque. These include their high strength, which makes it possible to create extremely rigid structures in terms of torsion and bending, excellent crash performance and low weight. CFRP components are up to 50 percent lighter than comparable steel ones, yet retain the same level of stability. Compared with aluminum, the weight saving is still around 30 percent, while the material is considerably thinner.

The weight advantages achieved through the carbon-fiber battery monocoque are reflected in the agility of the SLS AMG E-CELL and, in conjunction with the highly innovative wheel-selective four-wheel drive system, ensure true driving enjoyment.

The carbon-fiber battery monocoque is, in addition, conceived as a “zero intrusion cell” in order to meet the very highest expectations in terms of crash safety. It protects the battery modules inside the vehicle from deformation or damage in the event of a crash.

The basis for CFRP construction is provided by fine carbon fibers, ten times thinner than a human hair. A length of this innovative fiber reaching from here to the moon would weigh a mere 25 grams. Between 1000 and 24,000 of these fibers are used to form individual strands. Machines then weave and sew them into fiber mats several layers thick, which can be moulded into three-dimensional shapes. When injected with liquid synthetic resin, this hardens to give the desired structure its final shape and stability.

Through their experience with the SLR, the AMG Black Series vehicles and in motorsport, Mercedes-Benz and AMG have accumulated more than 10 years of expertise in working with carbon-fiber materials. AMG currently makes the propshaft for the SLS AMG, for example, in carbon-fiber. On the SLS Roadster, the supporting structure for the draught-stop is made as standard as a carbon sandwich structure. This component, with extremely short cycle times in an industrially oriented manufacturing process, already demonstrates what will be possible in the future.

Optimum weight distribution and low centre of gravity
The purely electric drive system was factored into the equation as early as the concept phase when the gullwing model was being developed. It is ideally packaged for the integration of the high-performance, zero-emission technology: by way of example, the four electric motors and the two transmissions can be positioned as close to the four wheels as possible and very low down in the vehicle. The same applies to the modular high-voltage battery. Advantages of this solution include the vehicle’s low centre of gravity and balanced weight distribution – ideal conditions for optimum handling, which the electrically-powered gullwing model shares with its petrol-driven sister model.

New front axle design with pushrod damper struts
The additional front-wheel drive called for a newly designed front axle: unlike the series production vehicle with AMG V8 engine, which has a double wishbone axle, the SLS AMG E-CELL features an independent multi-link suspension with pushrod damper struts. This is because the vertically-arranged damper struts in the series SLS had to make way for the additional drive shafts. As is usual in a wide variety of racing vehicles, horizontal damper struts are now used, which are operated via separate push rods and transfer levers.

Thanks to this sophisticated front-axle design, which has already been tried and tested in the world of motorsport, the agility and driving dynamics of the SLS AMG E-CELL attain the same high levels as the V8 variant. Another distinguishing feature is the speed-sensitive power steering with rack-and-pinion steering gear: the power assistance is implemented electrohydraulically rather than just hydraulically.

AMG ceramic composite brakes for perfect deceleration
The technology vehicle is slowed with the aid of AMG high-performance ceramic composite brakes, which boast extremely short stopping distances, a precise actuation point and outstanding fade resistance, even in extreme operating conditions. The over-sized discs – measuring 402 x 39 mm at the front and 360 x 32 mm at the rear – are made of carbon fiber-strengthened ceramic, feature an integral design all round and are connected to an aluminum bowl in a radially floating arrangement.

The ceramic brake discs are 40 percent lighter in weight than the conventional, grey cast iron brake discs. The reduction in unsprung masses not only improves handling dynamics and agility, but also ride comfort and tyre grip. The lower rotating masses at the front axle also ensure a more direct steering response – which is particularly noticeable when taking motorway bends at high speed. The ABS and ESP® systems have been adapted to match the special application spectrum of the permanent all-wheel drive.