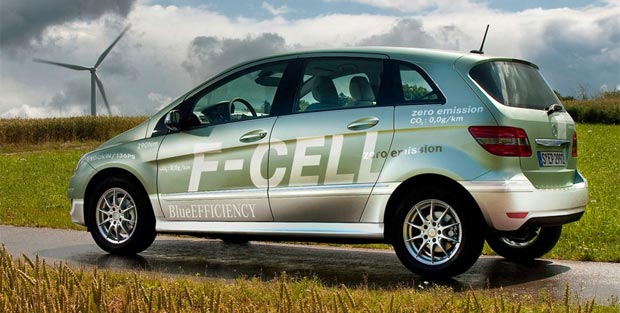 The Mercedes-Benz B-Class F-Cell is joining Honda’s FCX Clarity as the newest hydrogen fuel-cell vehicle to hit the streets of America.

Powered by an electric motor with 100 kW/ 136 horsepower and 215 lb-ft of torque, the Mercedes B-Class F-CELL provides driving performance comparable to a similar conventional car while using about half the fuel.

The B-Class F-Cell utilizes a fuel cell stack for generating electricity and a lithium ion battery for energy storage. Taking only approximately three minutes to refuel, the B-Class F-CELL emits only water as a by-product of the fuel cell system.

At the same time the B-Class F-CELL achieves an NEDC consumption (New European Driving Cycle) equivalent to only 3.3 liters of fuel (diesel equivalent) per 100 kilometers (71 mpg U.S.) with a range of around 400km (240-250 miles).

For now, 70 drivers in Los Angeles and San Francisco will be able to test out the B-Class F-Cell by applying to Mercedes for a lease.

To showcase the F-Cell’s road-worthiness, Mercedes sent an F-Cell on an around-the world trip last year, which it completed in 125 days. And to further promote the car, Mercedes rolled out a catchy YouTube video featuring an F-Cell draped in LEDs and connected to a camera that captured the outside environment, which was then transmitted back through the LEDs. The effect was to make the car invisible — emphasizing Mercedes’ assertion that the F-Cell is essentially invisible to the environment in terms of its emissions.