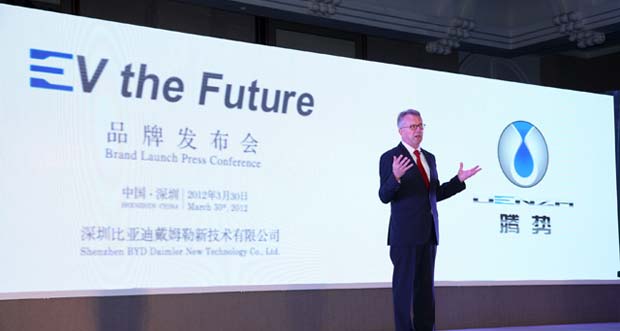 Created as a Chinese-market-only, the new DENZA brand for the electric vehicle developed by BYD Daimler New Technology Co. Ltd. (BDNT), the 50:50 joint venture between Daimler and Chinese electric battery and car manufacturer BYD, was formally revealed today in Shenzhen at the “EV – The Future” event.

The DENZA brand launch is the latest move following the BDNT joint-venture contract signing in May 2010 and granting of the China business license in early 2011.

The first public appearance of the DENZA concept car will be at Auto China in Beijing in April, with first production planned in 2013. With rapid economic growth, increased urbanization, an open-minded consumer, and a supportive government, all the elements are in place to mark China as one of the countries with the highest potential for electric vehicle adoption.

The DENZA name and logo have been carefully crafted to convey very precise themes. Primarily created with a focus on Chinese consumers, the name DENZA derives its strength from profound and positive associations with the Chinese characters téng shì, which together mean “rising power and momentum” – referring both to the attributes of the car as well as the pace of development DENZA aims to be ahead in the New Energy Vehicle industry. DENZA is also a distinctive name in the English language with no prior associations.

The logo is designed around the flowing form of a central water-drop, supported by two hands. The blue water-drop represents the environmental friendliness of the all-electric vehicle, with blue also signifying advanced technology and a bright future. The curves on either side of the water-drop represent the hands of the two partners providing mutual support for the joint venture, as well as for the environment.