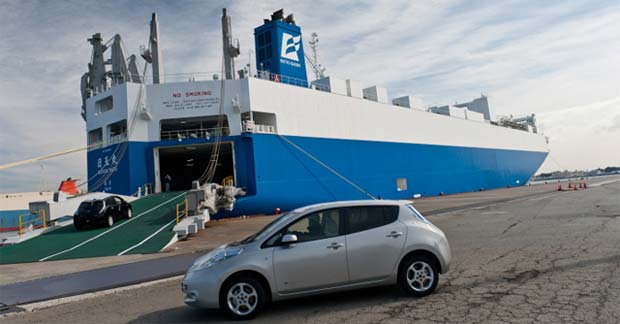 Nissan Motor Co., has launched its first energy-efficient, coastal car carrier, the Nichioh Maru, which will transport completed vehicles and parts on one of Japan’s main maritime shipping routes.

The maker of the first mass-marketed, 100% electric vehicle — the Nissan LEAF — now employs an eco vessel nicknamed “Roro” — for roll-on and roll-off pick-ups and deliveries.

At one-and-a-half football fields in length, the carrier took four years to complete and began its maiden voyage January 27.

It employs LED lighting in the ship’s hold and living quarters, and its hull is painted with the latest low friction coating, among other energy-efficient features onboard.

“As Nissan went to the effort to launch the Nissan LEAF at that time, in terms of the logistical flow, we thought there would be a way for us to contribute using state-of-the-art technologies,” said Tomohiko Uchiyama, president of Nitto Kaiun Corporation, Roro’s operator.

Compared to an existing car carrier of the same type, this ship can achieve a fuel reduction of up to nearly 1,400 tons annually, which converts to an annual reduction of 4,200 tons of CO2 emissions.

The Nichioh Maru follows in the sustainability wake of the City of St. Petersburg eco-carrier, which Nissan began using in 2010 for international routes in Europe.

The Nissan Green Program 2016 aims to use more renewable energy and have an industry-leading, small carbon footprint.

Each roundtrip uses roughly 13 tons fewer fuel, for a reduction in CO2 emissions of 18% compared with a standard vessel.[wzslider height=”400″]