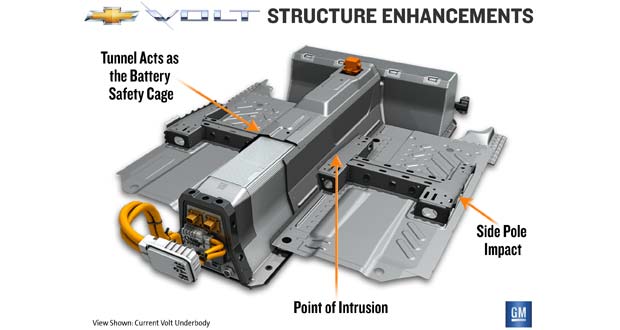 General Motors has changed the vehicle structure and battery coolant system in the Chevrolet Volt which would further protect the battery from the possibility of an electrical fire occurring days or weeks after a severe crash.

The Volt is a Top Safety Pick by the Insurance Institute for Highway Safety and has earned other safety awards from key third-party organizations.  Through the first 11 months of 2011, Volt owners accumulated nearly 20 million miles without an incident similar to the results in the NHTSA tests.

GM will conduct a Customer Satisfaction Program to further protect the Volt battery from the possibility of an electrical fire occurring days or weeks after a severe side crash. Modifications will:

– Strengthen an existing portion of the Volt’s vehicle safety structure to further protect the battery pack in a severe side collision.

– Add a sensor in the reservoir of the battery coolant system to monitor coolant levels.

– Add a tamper-resistant bracket to the top of the battery coolant reservoir to help prevent potential coolant overfill.

GM conducted four successful crash tests between Dec. 9 and 21 of Volts with the structural enhancement. The enhancement performed as intended. There was no intrusion into the battery pack and no coolant leakage in any of the tests.

Volt customers will be individually notified when the modifications are available for their vehicles. The enhancements are being incorporated into the Volt manufacturing process as production resumes this month.